In 2004, St Kilda became the first and only team to kick with greater than 60 per cent accuracy for a whole season. It helped that they had Fraser Gehrig, Nick Riewoldt and Stephen Milne up forward. Gehrig kicked 103.39 that year.

But coach Grant Thomas played a part. As related by James Coventry in his 2018 book Footballistics, Thomas believed goalkicking to be a neglected fundamental. Ignoring the warning of sports scientists about overwork, he held long goalkicking sessions before and after training. 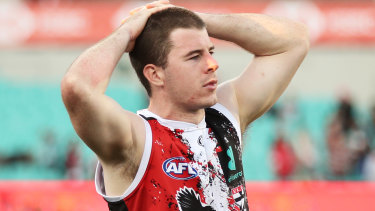 Jack Higgins after St Kilda’s defeat by the Swans.Credit:Getty Images

His favourite was “the gauntlet”, in which players had to take shots while running through a tunnel of jeering teammates. But Thomas did not keep score. “It’s only when you bring outcome into a skill that you have problems,” he told Coventry, “whether that be with a golf putt, a smash in tennis or a shot at goal, because you’re thinking about the consequences rather than the cause.” 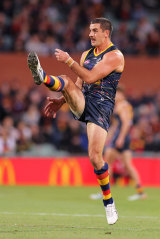 The Bulldogs could afford Naughton’s waywardness, but Walker and Higgins each cost his club a win. A 2005 RMIT study showed that two-thirds of all games are won by the more accurate side, and fully 10 per cent of losses can be put down entirely to errant kicking. Here were two.

Poor Higgins: you could see the colour drain from his usually cheerful face as the consequences of each miss compounded. At the final siren, he looked for the ground to swallow him up.

Goalkicking is the one skill that never improves. It’s an annual lament you could set your watch to, along with bleating about umpires.

In fact, accuracy sharpened slowly through the competition’s first 100 years. The last team to win the premiership kicking more behinds than goals across the season was Geelong in 1963. But since the turn of the 21st century, there has been a slight decline, to a bit more than 51 per cent. It is necessarily a fuzzy figure because not until recent seasons does it take into account complete misses, rushed behinds and shots that fall short. But it gives you an idea. 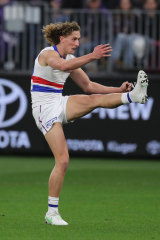 On the one hand, any regression is hard to understand. Balls, boots and surfaces have all improved vastly, wind is a lesser factor in enclosed stadiums, and since 2000, coinciding exactly with the downturn, half the games in Melbourne have been played in a roofed stadium where conditions don’t matter at all.

So why so wide? You could write a book about it. Actually, one will be out later this year. It’s called The Art of Goalkicking, written by footy sage David Wheadon. Art, note. Science won’t necessarily have all the answers.

Footy teems with theorems. Here’s an assembly of some.

Lack of practice: Kids in the park don’t bet cans of Coke against each other from 30 out, straight in front. This was Geelong cult hero Stevie Johnson’s insight into himself. Even at pro level, clubs treat goalkicking practice as an extra whereas in a game it is life and death.

One-time centurion Brian Taylor used to protest this. Sports scientists devote their all to one-percenters, he said. Sharper shooting is a 10-percenter, yet isn’t even worth a full-time coach. “It needs specialist goalkicking target teachers,” Wheadon said.

Against that, there is a risk of over-training. This was goalkicking genius Peter Hudson’s angle, that extra training was counter productive if it was bedding down a faulty method. Wheadon agrees. “You might be putting repetition into failure,” he said. “And you can’t replicate game-day pressure.”

Pressure: The tackle count has more than doubled this century. There was already a premium on forward pressure, and Richmond have increased it. Forward play is crowded and hectic. Set shots are taken from further out where the odds lengthen, too.

It helps if you have players or a game plan that gains you shots from closer range. With Josh Kennedy, Jack Darling and now Liam Ryan to aim for, West Coast are consistently the most accurate team in the competition. 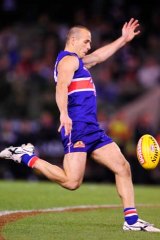 Fatigue: Coventry has figures to show that accuracy diminishes over the course of a match, falling by about 1 per cent for every five minutes of play. Fewer interchanges exaggerates the effect. So does the expectation that forwards work like back pockets. The shot clock has become a de facto heart-rate monitor. Trailing teams become more inaccurate in the last quarter as the urgency grows. Ask St Kilda.

Spread of goalkickers: It’s an article of faith in the modern game, but it means fewer shots for your specialists. Other sports contrive to get the ball into the hands of experts. Footy tries to make everyone one. But just as putting is a completely different skill to driving, a kick at goal is only a distant cousin of a field kick.

Technique: In most sports, the ball sits still. In footy, it has to be introduced by hand to the foot while on the run, three moving parts in contradistinction. That’s where it all starts to go wrong.

Scrutiny: With so many cameras, a player cannot help but be aware that he is under the microscope. The little man inside his head and all the little men and women outside it make for quite a cacophony. The shot clock becomes a time bomb, ticking in the mind. Most footballers prefer to play on instinct; all this deliberation ties them in knots.

There is a sub-set here. Goals come variously on the run, from snaps or from set shots. The shape of the modern game has throttled the running shot. The days of Chris Judd bursting repeatedly towards goal are long gone. The snap is still the snap. But more than half of all shots now come from marks and frees. That adds weight to each. 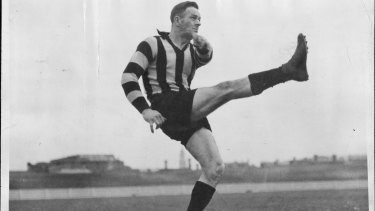 So what to do?

For one, have a technique and groove it. Visualise first. Wheadon remembers that golfing great Jack Nicklaus would trace the ball backwards in his mind, from the heart of the green to the lie at his feet. Pass it through the goals like a field kick if that feels safer. This was Taylor’s prescription.

Here’s one recommendation. “Pick out a point behind the goals. If you see a chap with a cigar, or a chap without a hat, kick the ball to him. Don’t worry about the goal posts.” It’s quaint. But it did gain Gordon Coventry 1299 goals.

Now retired Bulldog premiership player Tory Dickson had a preternaturally high accuracy rate of nearly 75 per cent. He told James Coventry he had a three-item check list: forward momentum, a short ball drop and a pointed toe on impact. Bulldogs fans will never tire of visualising it.

Wheadon is a disciple of the classical school: everything in a straight line: hips, hands, ball, foot. “If you run straight, drop the ball straight and swing your legs through straight, it’s more likely to go straight. It’s the way of all the greats,” he said. Jack Riewoldt is a good latter-day example.

It’s all to do with Newton’s third principle of equal and opposite forces. By swinging your leg across the ball, Wheadon said, you’re more likely to catch one side or the other, so slicing or hooking it. 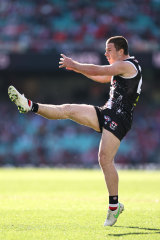 Jack Higgins gets it all right.Credit:Getty Images

But Wheadon acknowledges that it’s not one size fits all. He’s never seen a golfer who steps to his right to putt, but he would not coach it out of a player for whom it was working. Each body has its own biomechanics. Look at Geelong’s Gryan Miers. Everything’s sideways, but he kicks at an elite 64 per cent.

In fact, Wheadon wonders why clubs do not personalise goalkicking training the way they personalise fitness training.

The post-modern remedy is the kick around the body. When Stevie Johnson did it, it was thought that it was because only he could. Now everyone does. It’s almost to the point where you can depend on a player to score by hooking it across his body. It’s the drop punt, 30 metres out straight in front that frazzles.

Wheadon says that although the set snap does not conform to straight-line theory, it’s a good kick. “The principle is the same as an oversize tennis racquet or a bigger head golf club,” he said. “There’s a greater contact area available, more forgiveness. You’re hitting more of the fat part of the ball. It’s an easy shot, particularly if you’re dead in front.” If you hit it sweetly, aerodynamics does the rest.

Goalkicking is harder than it looks. Even among the goalkicking legends, 70 per cent was unattainable in the long run. Walker, Naughton and Higgins need not fret. They are better kicks than they showed last week. St Kilda’s Max King looks like a more hardcore case, but he’s only just beginning. Wheadon would not tamper with any of them unless there was a pattern to their misses.

Wheadon said – and history bears him out – that a footballer should aim from 10 shots to kick 6.4 and improve from there. “The reality is that you’re not going to kick 10.0,” he said. “You’re just not. It’s too hard.”

June 11, 2021 Rugby League Comments Off on Let’s get this straight: The tough art of kicking for goal
NFL News