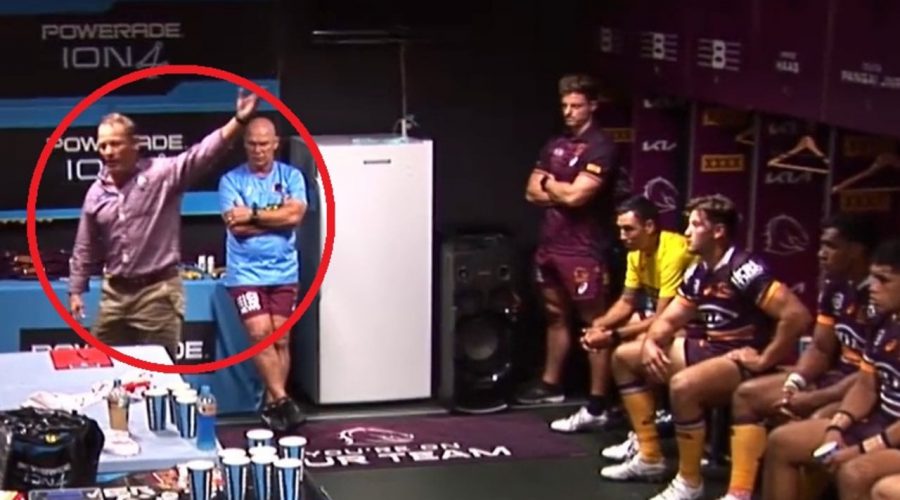 Brisbane Broncos coach Kevin Walters has unloaded on his side before the game even started and it was almost a masterstroke as the reigning wooden spooners led the Penrith Panthers at halftime.

While the Broncos couldn’t hang on for the win as the Panther claimed a 20-12 victory, the 12-10 lead at the break shocked the NRL with the Broncos starting the game at the longest odds in the club’s history.

The TAB had the side at $14 odds, while the unbeaten Panthers were unbackable at $1.01.

The Broncos even had a 27.5 point headstart in line betting and were pretty much given no chance at upsetting the Panthers.

And yet, at halftime, the Broncos were ahead with Walters’ pre-match words seemingly ringing in his charges’ ears.

Before the game, Fox League’s Warren Smith said it was as “animated a coach as you will see before kick-off”.

“Kevvie Walters was blowing up deluxe, very upset about something that maybe that happened in the warm-up, he is a coach looking for a response from his team tonight,” Smith added.

Walters’ secret weapon as a coach has long been believed to be his passion as he often showed as Queensland coach.

And as a five-time premiership winner with Brisbane, he was the man given the task of resurrecting the club after its nightmare 2020 wooden spoon season.

Post-match, Walters said the pre-match scenes were an outpouring of his passion.

“I just want these guys to do well and the club to do well,” he said. “I guess that's the passion from me for this place. It was a good response from them.”

Asked what he said, Walters said “I can’t remember”.

When pushed, he said it was to show fighting spirit “to themselves and to each other more than anything, and to all our supporters here tonight”.

While the Broncos have hardly fired a shot in anger in 2021 with only a win over the Bulldogs to show after five rounds, Brisbane have finally sent a major warning.

After kicking an early penalty goal that had social media and the commentators wondering why they wouldn’t look to score against a Panthers side who seem to score tries for fun.

The Panthers hit the board with Kurt Capewell sliding over the line with ease.

But the Broncos were far from done.

The Broncos big forwards really put in against Penrith.Source:Getty Images

With a tactic of bombing winger Brian To’o’s wing and running Tevita Pangai Jr at him, it paid off with the big man crossing in the corner off a dropped bomb.

The Broncos kept peppering the wing but the Panthers were next to score when Matt Burton scored, before a response to “arrogance” claims during the week with a classy handshake.

The Broncos then hit the lead with a try through Ethan Bullemor catching a ball on the inside and stepping Panthers fullback Stephen Crichton to take the lead at the break.

The second half, the Broncos weren't able to score but stayed in the game with resolute defence.

The Panthers could only kick a 52nd minute penalty goal before Nathan Cleary won the game off his boot with a 40m two-point field goal and a 77th minute try to steal a 20-12 result.

Walters said the players “had a crack” but that he was “disappointed” when the side couldn’t get over the line.

“There’s a lot to take out of it that’s good but this club is about winning and that’s our third or fourth loss in a row,” he said. “Certainly some better moments from us, particularly in the first half, I thought it was really good with everything we were doing but in the second half, just lost our way a little bit and they were a bit too good to come home at the end on top of us.”

The Broncos were committed to the cause.Source:The Daily Telegraph

But social media clearly believed the Broncos had turned a corner by taking the Panthers down to the wire.

The Broncos tackled tonight & that’s a rudimentary platform for improvement.

Really good game. Good on the Broncos for ripping in. Finally showed their size and strength. 🏉🏉 #NRLBroncosPanthers

Let’s hope tonight is the beginning of the turnaround for Brisbane. Stoic, resilient, trying performance virtually all night. Class of the Panthers the difference when it counted, but Broncos made them sweat more than most have this year #NRLBroncosPanthers#NRL

Can the Broncos please get a point for winning the first half. Valiant effort. #NRLBroncosPanthers