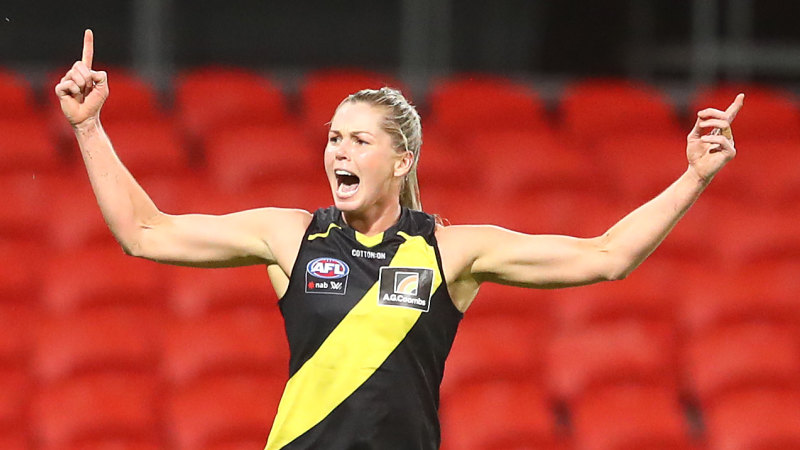 Richmond skipper Katie Brennan led from the front and Ellie McKenzie added further evidence to her case as the Rising Star award as the Tigers scored their second win of the season on Friday night.

The Tigers beat Gold Coast by 15 points, 6.5 (41) to 4.2 (26), at Metricon Stadium, but what will please the yellow-and-black supporters is the way the side’s big guns stood tall when challenged.

The Tigers looked to be in control at half-time, holding a 15-point lead, but two goals to the Suns to open the third term had them within three points and within sight of their first win in 2021. 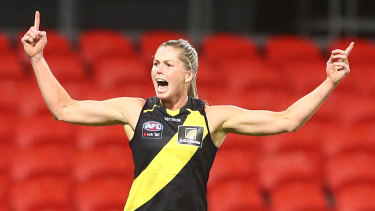 Richmond star Katie Brennan celebrates one of her three goals against Gold Coast at Metricon Stadium on Friday night.Credit:Getty Images

But this was where the likes of Brennan (15 disposals, three goals), McKenzie (20 disposals, one goal) and Monique Conti (25 disposals) showed their class, lifting and finding more of the football when it mattered.

In the last term, the Tigers surged clear and with confidence high they will be desperate for a win at Punt Road when they host West Coast next round.

Both sides looked to run in numbers and create with the Suns first to score when the aggressive Maddison Levi ran onto the football and kicked an open goal.

But Richmond’s forays were becoming more precise and after Sophie Molan hit the closely defended Brennan on a lead, the Tigers skipper went back and kicked truly from 35 metres out to tie scores at 6-6 going into quarter-time.

The Suns were willing and physical around the contest but they couldn’t keep enough of the football in the second term as Richmond continued to flow forward with hard running through the lines.

The Tigers weren’t as lethal with all their inside 50s and they could feel a little hard done by when the Suns looked to have gone over the line with holding or late tackles, but Richmond did manage to kick two crucial goals via Courtney Wakefield and the ever-dangerous Brennan.

A 21-6 lead at half time looked potentially a game-breaker but former St Kilda star Ali Drennan began pushing forward and winning key possessions with her soccer out of the centre-circle rolling forward and ending up with Levi, who picked it up cleanly and kicked her second goal to open the third term.

Kate Surman kicked an opportunistic goal soon after, snapping on her right foot and putting it through making it 22-19.

The Suns were right in the match but Rio Olympic basketballer turned Tigers recruit Tessa Lavey used her speed and kicking skills to put Christina Bernardi into an open goal with her kick from 40 metres rolling through for a major.

The Tigers led by 10 points to begin the last term but Rising Star favourite McKenzie marked and kicked truly to extend that margin with 12 minutes to play.

Brennan added a third goal to push her side clear and begin celebrations.

Conti back with aplomb

Tigers star Conti returned from a week out and was her regular classy self, tirelessly winning possessions throughout the match.

As skilful as Conti was, she didn’t have things all her way as she was chased down and caught holding the ball in the third term by Tori Groves-Little.

Conti had 25 disposals and seven tackles

Olympic basketballer-turned-footballer Lavey continues to come along in leaps and bounds for the Tigers despite having played just five games.

Lavey (13 disposals) was a constant threat to run clear on Friday night and her influence grew over the game.

Lavey’s highlight came at a crucial moment in the third term with the Suns just three points down. She took the ball down the wing and kicked into the forward line where she found Bernardi for arguably the most import goal of the match.

Whether Lavey ends up going to Tokyo with the Australian Opals remains up the air as there are plenty of contenders for the point-guard roles but she is fast becoming a player to watch for the Tigers.