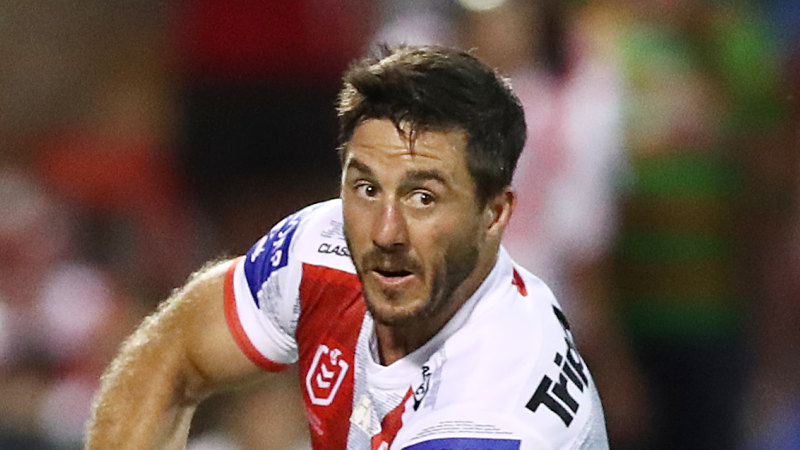 Tough-as-nails St George Illawarra skipper Ben Hunt rated the pain of playing an astonishing 71 minutes with a broken leg “a seven out of 10”.

And by avoiding surgery, Hunt said he was an outside chance of making a remarkable return in time for the Anzac Day blockbuster against the Sydney Roosters. 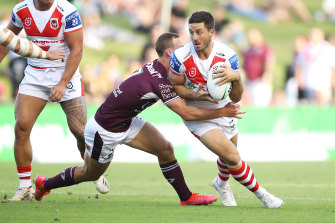 Ben Hunt rated the pain of playing with a broken leg a “seven out of 10”.Credit:Getty

The star No.7 has always been respected for answering tough questions after losses, and the Dragons faithful no doubt admired the courage he showed last Friday night in the middle of WIN Stadium when clearly in pain.

Hunt told the Herald he would remain in a moonboot for the next few weeks, and medicos were backing him to pull on the Red V again in four to six weeks.

“Everyone’s one-to-10 pain rating is different, but I’d give it a seven or eight,” Hunt said.

“It really hurt but it wasn’t like, ‘get me off here’. A few people have asked me [how it felt]. I was hurting, but it was also manageable and I was trying to stay focused on the actual game.

‘It wasn’t much fun running around in the second half.’

“I could still put weight on it and get around reasonably well – I wasn’t flying, but I thought it was just bone bruising or a cork with some shooting pain down the calf.

“I had a little bone break in my ankle when I was younger, but it was nothing like this. I figured if I had broken my leg, I wouldn’t be able to stand on the leg at all.

“The doctor put some numbing cream on it, then I got on the bike and sat on that nearly all of half-time to keep the legs ticking over. It wasn’t much fun running around in the second half.”

Hunt picked up the impact fracture in his right leg when tackled by Queensland Origin teammate Daly Cherry-Evans and Jack Gosiewski in the eighth minute. Replays show him feeling for his leg before playing on.

He received a knock on the same spot a week earlier in Townsville, a performance some good judges hailed as his best to date in the Red V.

“Trying to sleep on Friday night was rough, and when I went to recovery on Saturday morning all the boys were into me because they thought it was just a cork and I was on crutches,” Hunt said.

“Once I went for the scans they found the fracture. I’m in a moonboot now for a couple of weeks and basically have to keep the weight off.

“But I don’t need surgery and the timeframe they’ve given me to return is four to six weeks. There’s nothing we can do and we have to let it heal itself.

“It’s definitely a bugger because personally I felt like I was hitting my straps, and the boys were coming together really well, but that’s the way footy goes. Every team has their share of injuries. It’s my turn at the moment.”

Hunt said a return for the Anzac Day clash against the Roosters would be the best-case scenario. Two Sunday games follow against the Wests Tigers and Bulldogs, before the Magic Round weekend against Melbourne.

The 31-year-old is desperate to get back for the Dragons. They were considered wooden-spoon contenders just a few weeks ago, but are now coming off wins over the Cowboys and Sea Eagles and head to Newcastle on Sunday brimming with confidence.

Hunt also knows if he can quickly regain his form it will not be lost on new Maroons coach Paul Green.

In the meantime, Hunt has backed Adam Clune to again do his Dragons’ No.7 jersey justice, especially with his excellent organisational skills.

March 31, 2021 Rugby League Comments Off on ‘It wasn’t much fun’: Hunt on the pain of playing for 71 minutes with a broken leg
NFL News