Dual North Melbourne premiership coach Denis Pagan recalls making half a silk purse out of sow’s ear in 2004, the second of four fruitless years at Carlton. “We had 10 wins. It was my best year’s coaching,” he said. “But besides myself, and one or two others, no one knows that.” 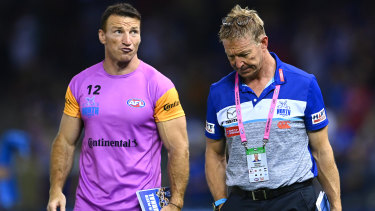 Carlton were at a low ebb when Pagan went there, just as North are now under rookie coach David Noble. “As long as people in the club understand,” Pagan said. “When I was at Carlton, there was division and disunity. It was a snake pit. I don’t think it’s like that at North now. But when you’re the coach, you’re very isolated.

Pagan said that for a coach in Noble’s position, it was mission impossible. “You haven’t got the seasoned players to support the young kids at the moment. That makes it a hell of a lot harder,” he said. “You’ve got to come in every Monday morning and be as positive as you possibly can. You’ve got to be honest and truthful, but add positives to it.” One might be to have won the hard-ball gets category one week, for instance.

Tony Shaw (Collingwood) and Peter Schwab (Hawthorn) both coached big clubs in lean times. Each must have arrived at games they knew they could not win, Geelong at Geelong for instance, North’s assignment on Sunday. “You can’t send that message. You even think that way,” Shaw said. “Every game might be a stepping stone to something new. You might find someone in a position where he becomes a five- to 10-year player for you.

“You’ve got a game plan. You know what you’re trying to achieve. You hope they understand it.” 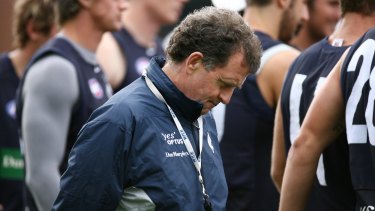 Schwab said a proper understanding of your side’s capabilities mattered. “Hard as it is, you’ve got to be realistic,” he said. “Do we expect North to beat Geelong? Well, no. Then it’s a matter of how you monitor losses. Is it a really bad loss, or did we learn a bit?

Schwab noted that Noble was new to coaching, but steeped in the game. That would help. So would his expertise as a list-builder.

“You know there are a lot of holes to fill. That can become overwhelming,” he said. “You start to think you’ve got so many gaps. But you’re never going to fill them all straight away. You’ve got to be careful you don’t let it drown you.”

Schwab said it was only natural for self-doubt to creep in. “You start to think, is the game plan right?” he said. “He won’t worry about the players, because he can’t, because that’s his list for the year. He’ll be thinking about how do we want to play? What’s best in the long term?” 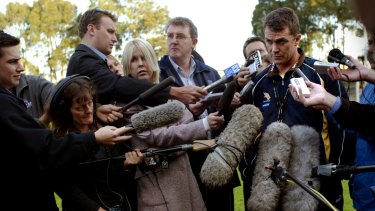 Peter Schwab is surrounded by the media when coaching Hawthorn.Credit:Vince Caligiuri

Shaw and Pagan both remember how vulnerable they felt. “Have a look at how close a good coach like Damien Hardwick was to getting the flick,” Shaw said. “He could have been one board member, or one ordinary administrator, one hour away from getting the sack. He would never have got the opportunity to do what he’s done.”

Pagan agreed. “You’ve got to have strong leadership, and I hope the people who are leading North understand that,” he said. “Most board members don’t really have an understanding of what goes on.”

Pagan said Noble had to trust himself. “You can do all these things and it will still be mission impossible,” he said. “But when you’re an AFL coach, that’s what you’ve got to do. Not many people will understand that. You’ve got to please yourself. That’s what I did at Carlton.”

April 16, 2021 Rugby League Comments Off on ‘It was a snake pit’: How AFL coaches deal with constantly losing
NFL News