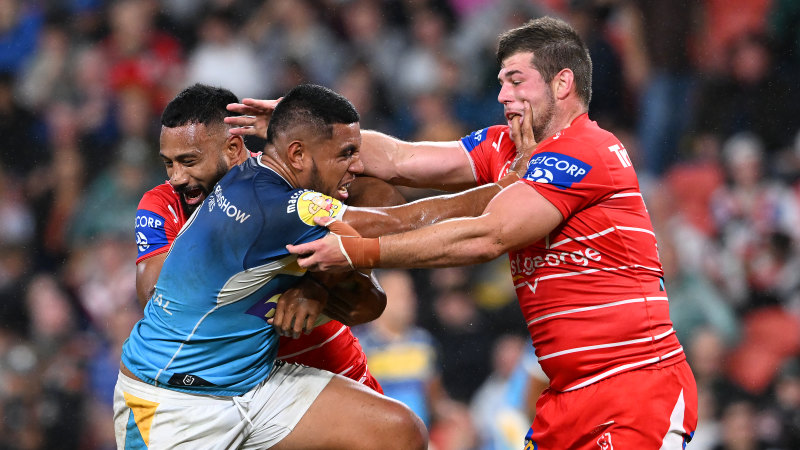 Isaako, an early-season recruit from the Broncos, dived over in the corner for the 89th-minute winner after earlier missing two match-winning field-goal attempts in the opening period of extra time, as the Gold Coast scrambled to a 20-16 win at Suncorp Stadium on Saturday night.

The NRL bunker reviewed Isaako’s grounding, but ruled he had just stayed infield after desperate attempts from Jack Bird and Tyrell Sloan to bundle him into touch.

The winning play came after Junior Amone, who had an otherwise impressive game for the Dragons, inexplicably fumbled a ball near his own try line under no pressure as he tried to collect a deflected Toby Sexton field-goal attempt.

St George Illawarra’s Zac Lomax kicked an unlikely penalty goal from the sideline to give the Dragons a second-half lead, but he fluffed an easier conversion attempt moments later which came back to haunt St George Illawarra. 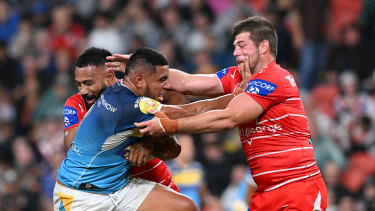 The video review officials ruled centre Phil Sami used a shoulder charge in a frantic attempt to stop Mikaele Ravalawa from scoring in the corner with 15 minutes left and the scores level.

Lomax stepped up to nail the penalty goal from right on the sideline, but he missed a much simpler conversion of Moses Suli’s first try in the Red V.

Jarrod Wallace’s close-range try tied the game with six minutes left to set up a heart-stopping finish, with the match destined for the first draw of the season until Isaako’s intervention.

Dragons coach Anthony Griffin recalled young gun Tyrell Sloan after last week’s hiding at the hands of title heavyweights Melbourne, and his clash with returning Titans fullback Jayden Campbell is a window into the next 10 years of fullback battles.

Sloan had a forgettable night under the high ball, was hugely relieved when the Titans couldn’t land the killer blow earlier in golden point as he didn’t attempt to catch a Sexton bomb and it ricocheted into Ben Hunt, who was accidentally offside.

The Titans might have been miffed they only led 10-4 at half-time after a glut of possession at St George Illawarra’s end, forcing five dropouts in the first 17 minutes as embattled young halfback Sexton kicked superbly.

His right boot set up the first try when Sami swatted a ball back and then threw the final pass for AJ Brimson to score in his first game back at five-eighth.

Josh McGuire’s 250th NRL game was much like a lot of the 249 beforehand – being sent to the sin-bin, the first of this year’s Magic Round.

To be fair, McGuire’s return to the Dragons after a five-game ban to start the year has been a large reason for St George Illawarra’s turnaround. But after Aaron Woods had needlessly given away a penalty for an attempted strip, McGuire was caught tackling Tino Fa’asuamaleaui from an offside position after a quick tap.

He didn’t return in the second half either with a groin injury.

Still, the Dragons not only repelled the Titans when down to 12 men, they actually scored too with Mat Feagai levelling the game at 4-all after crossing in the corner.

But the Titans’ dominance was rewarded when Beau Fermor ghosted between three Dragons defenders to ground Toby Sexton’s kick to give the hosts a half-time lead.

Jack de Belin’s second try in as many weeks, off an Amone pass, levelled the scores with 25 minutes left before Lomax’s penalty goal from the sideline gave the Dragons their first lead of the night.

Stream the NRL Premiership 2022 live and free on 9Now.