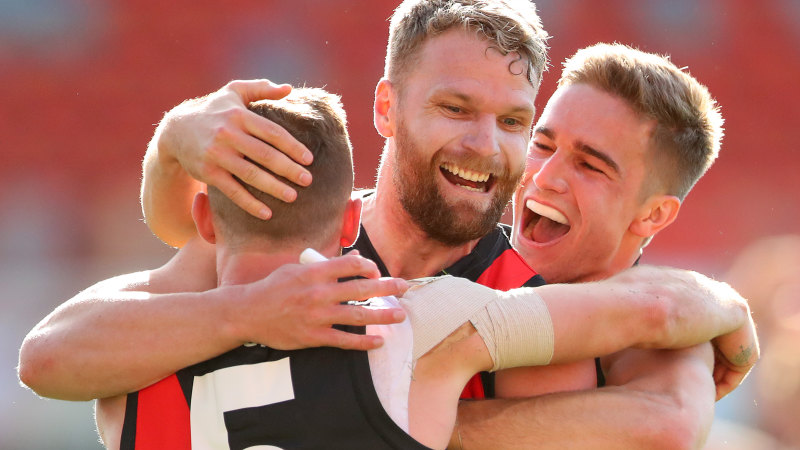 Essendon’s leaders shook off a spirited but inefficient North Melbourne to overcome the Roos on the Gold Coast and storm into the top eight.

With the win, Essendon jumps to seventh – percentage clear of Richmond in eighth, with West Coast and GWS still with round 18 games to play but on the outside looking in. 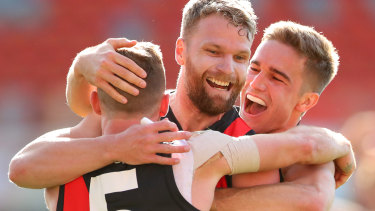 The Roos made the Bombers look second-rate and unaccountable at times in the first half, piercing their defence with a kick-mark game that put them 10 points in front at the main break.

But the Bombers ground their way into the lead, kicking four goals to one in the third term before sealing the 18-point win in the final stanza.

Darcy Parish (34 disposals and eight clearances) and Zach Merrett (39 disposals, nine clearances) led the way yet again for the Bombers, but it was Jake Stringer (four goals) who won them the match, booting three final-quarter goals to make sure of the result.

The Roos didn’t roll over the final term, finding goals through Curtis Taylor and Nick Larkey to cut a 20-point deficit back to eight points, but Stringer stepped up to the plate, capitalising on a turnover to kick back out to a 15-point lead.

But Taylor responded quickly, slotting a goal from the boundary to bring the margin back to nine points and Cam Zurhaar goalled to make it a three-point game after marking on the lead from a centre clearance.

But, again, it was Stringer who steadied the ship, kicking his fourth goal from a set shot after Anthony McDonald-Tipungwuti caused a crucial forward-50 turnover.

Cale Hooker then made sure of the result, kicking a long-range set shot of his own to stretch the lead back out to 16 points.

North Melbourne started the match strongly, with Bailey Scott and Larkey kicking the first two goals of the game. 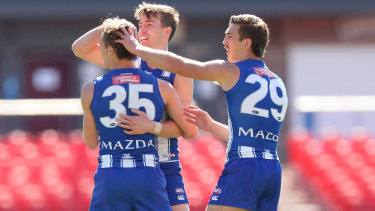 They took 30 marks to 15 in the first half an hour, owning the possession game, but were wasteful in front of goal to lead 4.4 to 3.0 at quarter-time.

The second term remained relatively pressure-less, with both sides creating enough end-to-end chains to impact on the scoreboard but neither side capitalising on their free-flowing ball movement.

Bombers captain Dyson Heppell kicked a crucial second-term goal, however, after copping a late hit from Tristian Xerri going back with the flight. Umpires awarded Heppell a 50-metre penalty and he converted late in the second term to keep his side in touch.

Devon Smith, who had just one ineffective kick to his name midway though the third term, missed a gettable set shot in that quarter, which would have put his side in the lead, and then Jaidyn Stephenson and Anthony McDonald-Tipungwuti each missed running shots on goal to impact the scoreboard.

But Smith made amends a few minutes later, getting to the front of a deep forward-50 contest before kicking a left foot snap to put his side in front by three points.

From there, the Bombers looked the likely winners, with Stringer extending the margin to eight points just 30 seconds before three-quarter time to take the momentum into the final stanza.