Geelong coach Chris Scott has distanced himself from a move away from the Cattery, declaring he will be uncontactable to rival clubs for some time.

The Cats premiership coach was careful not to make excuses for his side’s dismal performance in their 83-point loss to Melbourne in Friday night’s preliminary final in Perth, but admitted the last two years of constant travel had taken a toll on his players.

While Geelong’s ageing list profile will be the root of public debate in the coming months, the off-field attention at the club will now turn to Scott’s future.

The former Brisbane Lion is contracted at Geelong next season but is almost certain to be sounded out by Carlton, who are also talking to his twin brother Brad, the former North Melbourne coach, as they search for David Teague’s replacement.

But Scott was quick to shut down questions about his future, when asked if he would take a call from another club in the off-season.

“I wouldn’t answer my phone. It will be off for a while, mate.” 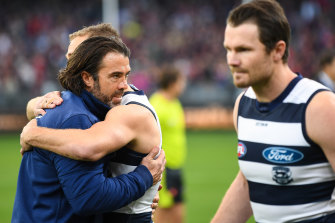 An emotional Scott, who prefaced many of his answers in his post-match media conference by stating he wasn’t in the best headspace to respond appropriately, said he was proud of his players and his club after a difficult two seasons.

The Cats followed up a grand final defeat at the Gabba last year – where they had led Richmond at half-time – with a preliminary final loss, a game in which Scott said they simply ran out of steam.

“Arguably it’s tougher when you get towards the end of the year and you’ve got a chance. I suspect that it would be a little easier finishing outside the finals, a bit of a sting and then you can move on pretty quickly,” Scott said.