Jake Trbojevic, the most humble NSW Blue, said the only thing that could have topped his Origin recall was his famous younger brother Tom being fit and in Perth with him.

“I’m not a special player, I won’t break a game open and come up with a match-winning moment, but I’ll do my best,” Trbojevic told the Herald.

“It was naturally tough to miss out on game one, I wasn’t dirty with anyone, I was understanding of the decision.

“But it didn’t take me too long to get over it because I got to captain Manly again. It was a blessing in disguise because I didn’t make it about myself or go back to my club and mope. I tried to be really positive and be a good leader for Manly.”

Tom is out for the season with a shoulder injury, and he was the man who destroyed Queensland in the wet in the west three years ago. 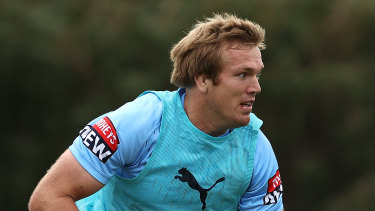 “I miss Tom, we miss Tom for Manly, and we miss him for NSW,” Jake said.

“Any team without Tommy will be worse off, just because he’s such a good player. It’s disappointing for him. I’m disappointed he’s not playing with Manly every week.

“I feel sorry for him. He does all the right stuff, he doesn’t drink, he’s very professional – he’s a lot more professional than a lot of people – but things haven’t gone his way.

“Last year was a great example of what he can do when he goes on an [injury-free] run. He’s only young. Touch wood, it’s the end of it and he has a lot of years ahead of him, not just for his sake but my sake because he’s in my team.” 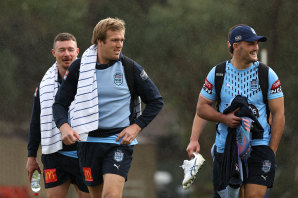 The Manly captaincy helped Jake Trbojevic forget about his Origin I snub.Credit:Getty Images

NSW coach Brad Fittler said it was a tough phone call informing Trbojevic he was not part of the Sydney plans.

“But it was a much better phone call inviting him back,” Fittler said.

Tom will remain in Sydney for the game as he continues his recovery, with his shoulder in a sling for a further fortnight.

The man dubbed “Turbo” is due back from shoulder surgery at the end of October, making him an outside hope for the Kangaroos’ World Cup squad, but is more likely to be left behind to work on his latest Seas Eagles comeback.

As for Jake, Tom said he could not recall seeing his 28-year-old sibling so down after the Origin omission. Jake ended up watching the 16-10 loss on the couch with his younger brother and Manly teammate Ben. 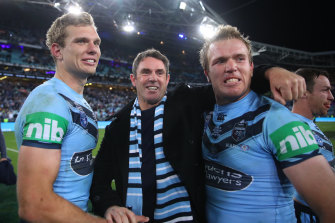 The Trbojevic brothers and Brad Fittler celebrate after a NSW Blues win.Credit:Getty

“Jake holds the NSW jersey in the highest regard, and always wants to play for them,” Tom said.

“He wasn’t off anyone, he was just disappointed he wasn’t playing.

“He then went off and played exceptionally well the past few weeks and deserved the recall.

“He’s very good defensively, we lacked that in the first game, and even Freddy has spoken about that. He’ll turn up all night on Sunday. I’ve never come up against him, but it’s hard to find a better defender than him.”

Watch the State of Origin exclusively live and free on Channel 9 and 9Now.

June 22, 2022 Rugby League Comments Off on ‘I miss Tom’: The only thing that could have topped Jake’s NSW recall
NFL News