What comes around goes around. It could be the motto for this COVID era.

Last year, as the AFL decamped from ’rona-ravaged Victoria, and other sports with it, the cry went up that Melbourne was losing its heritage. 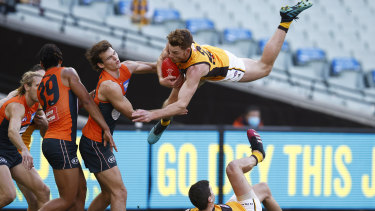 Hawthorn’s Tim O’Brien lands after a spectacular mark at the MCG, the home of Australian sport.Credit:Getty Images

As recently as last month, when it emerged that the 2021 Melbourne grand prix in November might have to be cancelled because F1 teams would not submit to two weeks of quarantine, it was heard again: Melbourne was forfeiting its jewels and, with them, its crown.

It was always over-wrought. Melbourne’s sporting status has nothing to do with volume. It’s culture. Simply, sport has been closer to the heart of the city’s narrative than other cities’ since the very beginning, and a couple of years of COVID dislocation won’t change that.

In 2020, the pride of Victorian sport was sequestered in Queensland. Despite that, two Melbourne clubs played off in the AFL grand final for the first time for nearly a decade, Melbourne Storm won the NRL premiership, and the Melbourne Vixens won the Super Netball title. No-one can really know what role civic pride played, but they all said it mattered.

Already this year, Melbourne United have won the NBL premiership and now Melbourne City the A-League title, despite having to play what should have been key home finals in other states. Evidently, Melbourne’s sporting spirit travels well. 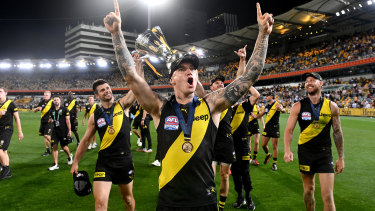 Richmond celebrate their 2020 title at the Gabba. Credit:Getty Images

Between times, there was an Australian Open. It was half-shut, but it was the Open nonetheless.

For many long months last year, and again recently, all roads led away from the Rome of Australian sport. For Melburnians, it was a kind of side-effect of the virus: not the worst part, but irritating nonetheless. But even as giddy leaders in other states thumped their tubs, there was no real sense that Melbourne had grown insecure in its sporting vocation.

Let’s face it: we were grateful to Queensland Premier Annastacia Palaszczuk, but she never did make a very convincing cheerleader for the AFL. 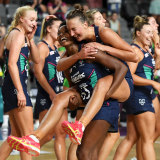 Then the wind changed and all those droplets began to blow the other way. As the shutters are pulled down again around Australia, suddenly Victoria’s capital is just about the most sanitised in the nation.

The AFL’s Sydney clubs already are installed here, indefinitely. The AFL is thinking hard about what to do with matches involving the Queensland clubs. Question marks hover over home matches for Adelaide and Fremantle next weekend.

Melbourne is beginning to look like a prospective … bunker? Retreat? Farm stay?

It’s nearly as hard for the AFL to say “hub” as it is for NSW Premier Gladys Berejiklian to say “lockdown”. That’s because it promised the players association early this month that there would be no hubs this year, with the rider, except as a last resort. So “resort” it nearly is.

The fact is that Melbourne makes for an ideal hub for footy. More than half the clubs are based in, or near, the city anyway, a geographical anomaly that becomes a strength. For more than half the players in the competition, playing out of Melbourne would not so much mean leaving home as going home, or staying home. 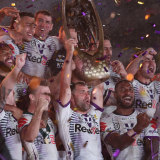 Let’s be smug for a moment. Melbourne can again be seen for what it is, a city perfectly adapted for sport, physically and psychologically. In the very middle of this hub, on either side of the railway tracks, there’s already a hub. Melbourne’s suitability, far from an accident, is literally by long-term design.

Stadiums are plentiful, and if needed, there’s Geelong and Ballarat, and Tasmania is clean and only a short hop away. What irony that would be, a couple of weeks ahead of the release of a report into the viability of a future Tasmanian team.

That might bug Gold Coast chairman Tony Cochrane, who could vouch for his hometown’s disinfected status only in that it is free of any contagion resembling footy fever. 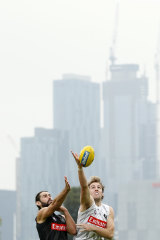 Hopefully, the plans the AFL are dusting off now – for, um, hub-like enclaves, compacted quarters, a reduced season – are contingencies only. With any luck and one or two fewer polemicists, the country will get by without further contrivances. Vaccines would help, but you can’t have everything, or else how good would Australia be?

For now, suffice to say that Melbourne stands by to be what it is anyway – a home and a home away from home for Australian sport.

July 3, 2021 Rugby League Comments Off on ‘Hub’ is the hardest word, but sporting roads lead to Victoria again
NFL News