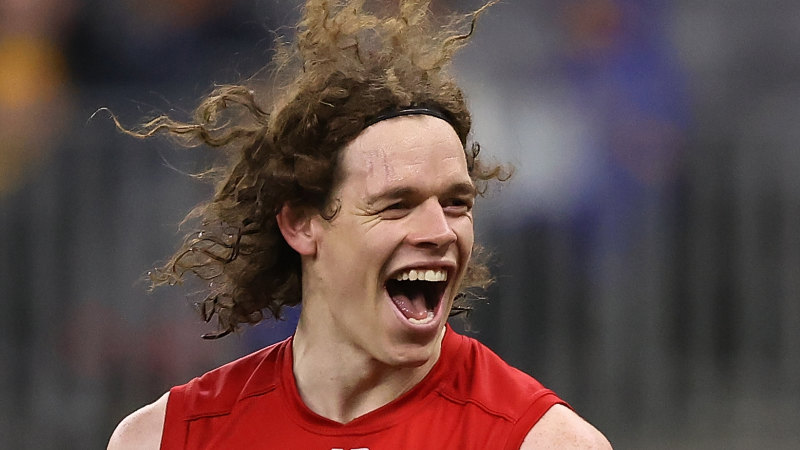 For any footballer to reinvent themselves is no mean feat.

Whether it be a new club, a position or role, or even just a change in mindset, there are distinct challenges that not every player can overcome. But at Melbourne, this is a new Ben Brown – and one who has barely been acknowledged. 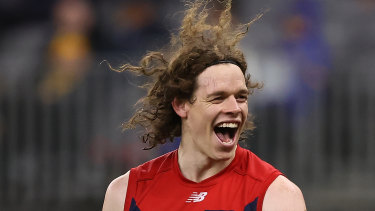 I’ll admit, after he struggled through his final season at North Melbourne and then early on in his time with the Demons, I worried he was just about done at AFL level. He looked a one-trick pony.

First, he was overlooked for Sam Weideman and then when he did finally make his debut in red and
blue, Brown looked tentative or even nervous. From afar, there seemed to be an insecurity about his game.

This was a player who booted 60 goals a season for three straight years at Arden Street before struggling with fitness and form in the hub last year.

As a more ‘traditional’ lead-up forward, had the game passed him by? Or had he simply been worked
out by his opposition? In his final year with the Roos he was being pushed off the footy too easily. Brown seemed to meekly accept any physical punishment that came his way.

Defenders were dictating body position to him, either marking the footy or spoiling it out of the
dangerous area. When so much of the modern game is built around forward pressure and locking the ball inside 50, letting that happen can quickly make a player a liability.

It’s hard to remember too many footballers building that into their arsenal, although one of the great champions of our game, Adam Goodes, did. In his early years he could get pushed around a bit, but in time he became a warrior – a really tough, hardened opponent. 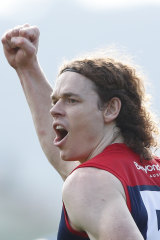 I also watched with interest as basketballer Luc Longley, in the ABC’s Australian Story, detailed how he had to transform his entire personality to play alongside Michael Jordan at the Chicago Bulls and survive in the NBA. A gentle giant, he had to find a new toughness to compete.

While Brown certainly isn’t on Goodes’ level, and isn’t dealing with anyone near Jordan’s stature, he’s managed to add a real steeliness to his game. He’ll never be an ‘aggressive’ player in the true sense of the word, but he’s now much more capable of playing an important role.

Once upon a time three or four goals was seen as the benchmark for a good Ben Brown game. Now, I expect to see more of what he displayed against Brisbane a fortnight ago. It wasn’t just the 15 touches and nine marks – although that’s handy – and it wasn’t necessarily the goal he kicked either. It was the predictability he provided his team-mates.

With the form of Tom McDonald dropping off a touch from the start of the season, Brown becomes the focal point that guys like Kysaiah Pickett and Charlie Spargo can work from.

With Brown more competitive in the air, he’s either marking it or the ball is dropping at his feet. That’s the predictability.

The Cats will be without their number one intercept player, Tom Stewart, but Jack Henry has filled that role well. Brown, along with McDonald and Bayley Fritsch need to make Henry, as well as Mark Blicavs and Lachie Henderson, accountable.

While Steven May and Jake Lever have had much of the focus this week, Brown looms just as crucial to the Demons’ hopes of breaking their premiership drought. Has something been triggered inside him? Or has a fresh environment and different coaching simply reinvigorated him?

Regardless, Simon Goodwin deserves great credit for what he’s managed to achieve this season.
The ‘demons’ of this club’s past often get spoken about, but now there seems to be a real calmness
about this group. They’re well drilled and look focused.

David Neitz led Melbourne to its last Grand Final in 2000, a 60-point defeat against Essendon.
Now, I believe this group is primed to overcome the years of pain that have followed and go one better.

September 9, 2021 Rugby League Comments Off on How the new Ben Brown has helped Melbourne to the cusp of a premiership
NFL News