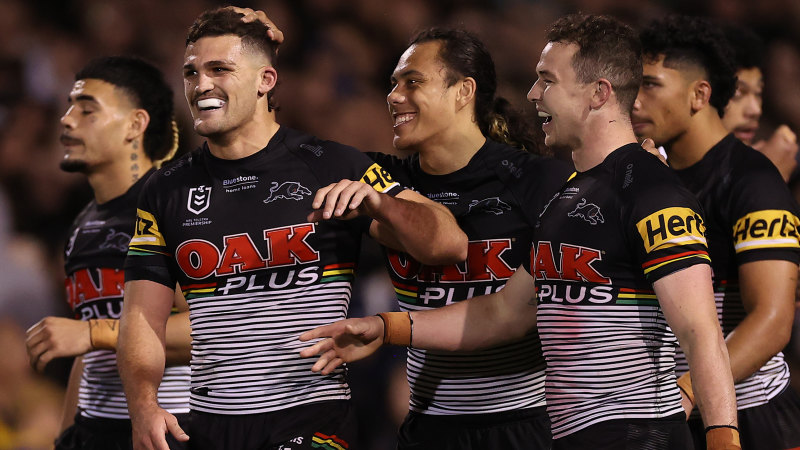 I’d love to see a crowd of 70,000 at Accor Stadium on Saturday night for the second preliminary final because this kind of match deserves it.

The problem for the Rabbitohs is Penrith is a 14-point better team than the rest of the competition — that’s how good they are.

They’re so well balanced, have a tough pack, strike in their outside backs and a bloke called Nathan Cleary.

They’ve got combinations all over the park because most of them have played with each other their whole careers. They know each other’s style and strength and ooze confidence.

The Penrith DNA is so clear to all these players. 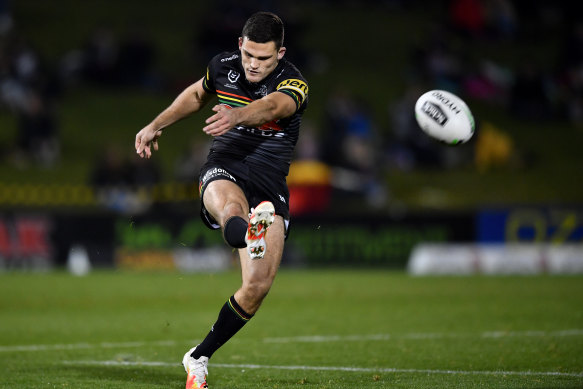 Nathan Cleary’s kicking game has been a big talking point during the finals series.Credit:NRL Photos

How? He’ll kick early to isolate him at the back. Penrith have a strong, aggressive kick chase, which will drain all the petrol from Latrell’s tank.

Penrith hooker Api Koroisau’s trickery around the ruck will terrorise Souths’ tiring defence. He challenges the markers, looking one way but going the other on every play-the-ball.

That gets big men such as James Fisher-Harris, Moses Leota and Spencer Leniu in one-on-one tackles, which gets quick play-the-balls.

That allows Isaah Yeo, Cleary, Jarome Luai and Dylan Edwards to take out the scalpel and go to work.

Souths are one of those teams that can find another gear, which is driven by Damien Cook, Cameron Murray and Mitchell.

Surprisingly, their defence and not their attack was the key to victory against Cronulla in last Saturday night’s semi-final.

The Sharks created half a dozen genuine scoring opportunities but the scrambling defence and desire of Souths kept turning them away.

To beat Penrith, you need a lot of ball movement coming out of trouble and in attacking situations.

This is why Parramatta have beaten the Panthers twice this season.

It’s a real fine line, though: if you drop the ball a few times, Penrith will suffocate you with their relentless attack, and Cleary’s kicking game.

Penrith will need to be disciplined and not give away too many cheap penalties. From restarts, Souths are just lethal with their set plays.

They get a tap, they work to an area of the field, and then on play four, five and six, Cody Walker and Mitchell just get to work.

But I can’t see anything other than a Panthers win. I think they win easily after 60 minutes of the tough arm wrestle.

Man of the match: Nathan Cleary.

Townsville will be a hostile environment for the Parramatta Eels: hot, humid and the smell of Bundy Rum everywhere they go.

Emotion can be dangerous for a footy team. It can make you unstoppable or too excited, prompting you to fizz out, and both teams will need to get the balance right in this preliminary final.

The Cowboys have been a real surprise. Like many people, I tipped them to finish in the bottom four. They’ve proved us all wrong.

They have steady, organising halves in Chad Townsend and Tom Dearden, who both kick well.

They have the X-factor of fullback Scott Drinkwater and the under-rated and tough running of hooker Reece Robson. 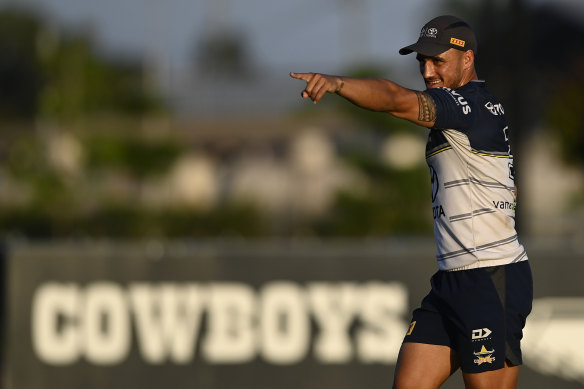 Valentine Holmes, a premiership winner with Cronulla in 2016, is one victory away from another grand final appearance.Credit:Getty

They have a strong pack with two freaks in Jason Taumalolo and Jeremiah Nanai.

To cap it off, they have strike on the edges with Val Holmes and Murray Taulagi.

Their only problem is they often put a lot of effort into their attack, which can harm their defence.

In the last six rounds, they played four top-eight teams, although Penrith sent out a reserve-grade team in the final round.

Then they let in 30 points against the Sharks in week one of the finals.

They give you a chance to beat them, and that’s a concern against an Eels side that keeps on winning under all sorts of pressure.

Their win over Canberra in the semi-final was their best performance of the year.

I’m loving the Eels attack: they play with width with crisp passing and off-loads from their big forwards with close support.

The cherry on top of all that is the kicking game of Mitchell Moses, who is coming into that sweet spot of his career.

When it all sticks, they are so tough to beat.

Parramatta’s left-side attack is really slick. The combination of Dylan Brown and Shaun Lane with Maika Sivo on the end has been lethal.

The worry for the Eels is how they handle the heat and humidity. For the Cowboys, it’s the expectation in front of a heaving home crowd.

Joey’s tip: Cowboys by 1 … off a Val Holmes field goal.

Man of the match: Reece Robson.