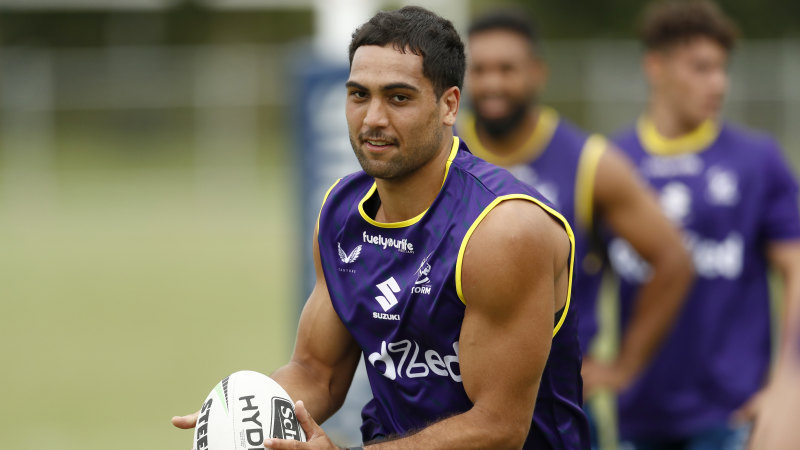 New Melbourne Storm winger Reimis Smith considers it a blessing to put on a Melbourne Storm training shirt each day, especially since most of his clothes are still in Sydney.

The 196-centimetre finisher had to expedite his arrival in Melbourne when Victoria suddenly closed its border with New South Wales, packing a bag, jumping on the first plane and leaving his beloved Audi and possessions behind.

But the sudden move could prove to be his making in Melbourne as it has allowed him to get a head start on his competition to replace winger Suliasi Vunivalu in round one. It will be Smith's 50th NRL game if he plays, following 49 games and 25 tries with the Canterbury Bulldogs. 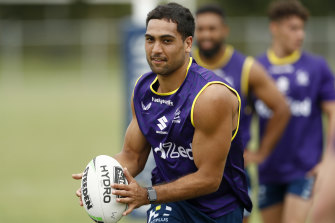 Reimis Smith joins the Storm after 49 games with the Canterbury Bulldogs. Credit:Darrian Traynor

Fijian winger Isaac Lumelume is completing two weeks in quarantine after returning from Sydney while fellow newcomer George Jennings had to fly back to Sydney on Friday to be with his partner for the birth of their child.

The 23-year-old is excited about the prospect of following in the footsteps of winger Josh Addo-Carr, who arrived from Sydney with few games under his belt and has become an Australian and State of Origin representative.

"To come down here at this time in my career, it will be massive and my next step in my career, hopefully into international footy but first off I want to be playing first-grade footy and playing in semi-finals and grand finals hopefully.

Smith is from Sydney but has New Zealand heritage and has pledged his rugby league allegiance to the Kiwis, with his sights on this year’s Rugby League World Cup.

Vunivalu was the Storm's leading aerial threat and Smith hopes he can fill that role and catch high kicks from Cameron Munster and Jahrome Hughes.

"One of my attributes is catching those high balls and cross-field kicks – I love that. It's my bread and butter really," Smith said.

"I believe in myself and think I can fill that hole and do a bit more."

Smith has moved in with teammate Max King and development player Dan Atkinson but he admits it was a difficult adjustment to arrive in Melbourne so suddenly.

"They shut the borders so I had get out of Sydney, I packed a little bag, jumped on the first flight and was in an Airbnb for a week," Smith said.

"Now I've moved in with two players. It's been tough being away from my family but I have to be strong about it and let everything fall into place.

"This is the best thing for me. I left my car, my clothes. I've had to buy heaps of clothes down here but I'm missing my car big time.

"I drive one of the club cars for now so that's all good."