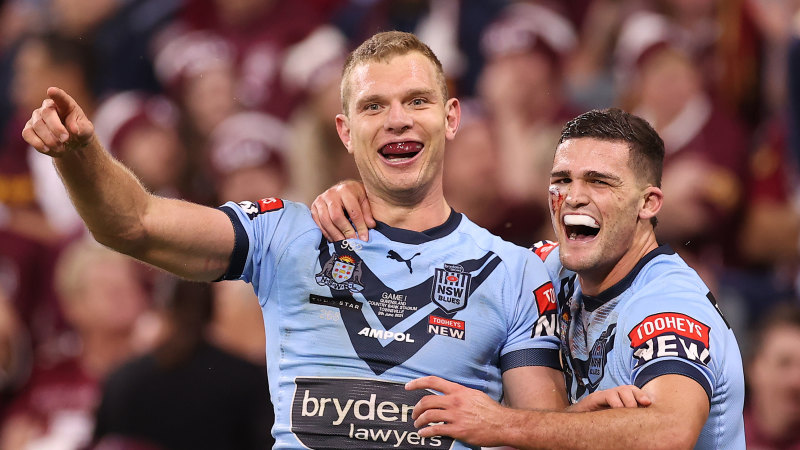 What happened to predictions that, with the new crackdown on high tackles in rugby league, the old game would be gone, Origin would be null and void and the whole thing would wither on the vine?

Did we see that in Origin I? 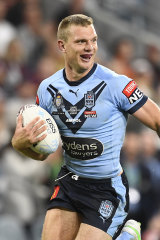 Tom Trbojevic had a night to remember on Wednesday, scoring three tries for NSW.Credit:Getty

Ratings peaked at 3.2 million, which saw the TV boffins purr. And yes, I could get a quote from them, but what would that count? Those boogers would find something positive to say if the ratings were a third of that – it’s their job. Instead let us go to the oracle, the great Kenny Sutcliffe, who though long retired and freezing in Mudgee, devoured the whole thing.

“Watched Origin and loved every second,” he told me. “We were enthralled by gifted players lifting skills to another level and doing it in relative safety because of the new tackling rules. One sided or not, it was a joy to watch. It’s a new and positive era for the code.”

Jaysus. Highlighting the need for change, I got another authoritative report about another league legend this week, still a relatively young man, whose body is as fit as ever but whose mind is mush. Just . . . gone. When his wife is away, he needs carers, and he spends most of his time gardening and walking the dog.

And, in the public domain, Brett Horsnell who played for the Gold Coast and Parramatta – and by his count was knocked out 51 times – posted on Facebook this week, these words: “So, for those of you who are disbelievers about Concussions. I’ve just spent 4 days in hospital with bleeding on the brain. Luckily close to the bone so no damage done this time! Another 4 staples in my skull.”

Parramatta? Gold Coast? NRL? Reach out for this guy. He is your guy. By his credible account, he received the damage doing him down while in your employ, and even though he can no longer entertain the mob, and keep the turnstiles clicking, it is at the very least your moral duty to look after him and see what you can do to help.

Well, I never. Four years ago your humble correspondent was minding his own business, feet up, at home, when a headline popped up on the SMH website.

“Peter FitzSimons’ questioning made Ange Postecoglou determined to walk away on his terms.”

Goodness! As I recounted at the time, the thrust of the piece by my colleague Mike Lynch turned on an interview the former Socceroos coach gave to Fox Sports about why he quit so suddenly after his team qualified for the World Cup.

Turns out, sports fans, it was me on the grassy knoll! The guts of it was that when I questioned Postecoglou on Channel Nine’s Sports Sunday program earlier in the year, as to whether he would fall on his sword if the Socceroos failed to qualify for the World Cup, he decided he didn’t want to put up with that kind of shit any more so would leave on his own terms.

This week, Postecoglou was confirmed as the new manager of Celtic. I am reliably informed the position is about five times more prestigious than being Socceroos coach, and twice as well remunerated.

You are welcome Ange. No, really.

One of the Twitterati made an interesting point to me this week: “Would it be cheaper for Australian sport if they all chipped in to pay Folau not to play any sport to avoid further legal costs?”

It might be! And not just the saving on legal fees. It would stop cold the endless trail of destruction in his wake!

He still has one key supporter, however. Clive Palmer was carrying on this week about how if Folau – and I am not making this up – had been selected for Queensland, he would have, and I quote, “made a difference. Queensland needed someone of his ability. Everyone in Queensland now needs to write to the QRL to voice their disapproval.”

Gee, Clive, with leadership like that, maybe you should start your own political party?

But seriously, if Folau is still so good he could swing a State of Origin, Catalans must have been devastated about losing him, yes? Uh, no. Wide World of Sports veteran reporter Tony Adams gave it to me straight: “I have a source high up at the club who told me that when he left at the start of the year, he promised Catalans that he would be back when the season started. But they knew he was gone for good and they didn’t really care.” 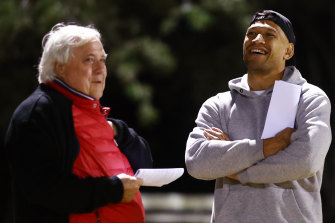 Clive Palmer and Israel Folau on the Gold Coast.Credit:Getty

“They weren’t impressed with the guy on or off the field and the fact he hasn’t even contacted Catalans to explain his non-return speaks volumes to them. He is very outspoken when it suits him – but very quiet when he has done the wrong thing. He is contracted to Catalans until November and they don’t feel like doing him any favours. They won’t release him . . . unless of course Mr Palmer comes up with a truckload of Euros to buy out the contract – that will change things very quickly.”

Pass the popcorn, sports fans. This is fabulous!

The redoubtable Benny Elias: “Whether we won last night by 1 point or 44 points it doesn’t matter, the job is only a third done.” Benny, we talked about this back in school! I said you have to do your maths homework, and you said you had to go to tackling practice instead. And now look what has happened. The job is actually half-done.

Golfer Megha Ganne, 17, on contending in the Women’s US Open while dealing with calculus homework: “I don’t know how I’m going to manage to fit that into my schedule in the next few days. Hopefully, my teacher gives me a little bit more time to do that. It’s hard to balance both.”

Steve “Blocker” Roach: “The Wests Tigers laying down like that . . . this ain’t soccer. You’ve got to get to your feet. He won the penalty but people won’t appreciate that.”

Nathan Buckley on his time at Collingwood coming to an end: “It is a bit sad to understand that that will be coming to an end on Monday. I have had a fair crack at it and everyone has their time, every person and every relationship, and mine has come.”

Tayla Harris on leaving Carlton to join the Demons: “I can already tell this will be a great environment for me to be the best version of myself.” 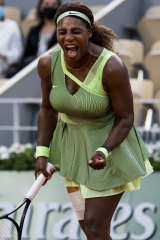 Serena Williams during her defeat at the French Open.Credit:New York Times

Golfer Lexi Thompson dropping a Michael Clarke: “I was just taking it way too seriously and thinking that Lexi depended on my score.”

Celtic announce their big news: “Celtic is pleased to announce the appointment of Ange Postecoglou as the club’s first-team manager with Ange commencing employment with immediate effect. The board is pleased to welcome Ange to the club and looks forward to working with him in the future.”

Carlton coach David Teague after another bad loss: “In terms of the brand and the game style, today it was more being able to execute the fundamentals. But we’ve got to become more consistent in our brand of footy, regardless of who we play or where we play.”

Mal Meninga: “My preference is that if you make yourself available for NSW and Queensland that, first and foremost, you are available for the Kangaroos. You might describe that as selfish but I want to keep the fabric of Origin clean. I’m a huge fan of the international game and I don’t begrudge players wanting to play for their ancestors and their country.” That’s an easy one, Mal. No. Proper league administration means strengthening other nations so the Kangaroos have some genuine competition.

Prescient James Tedesco speaking about Tom Trbojevic before Origin I:“He’s had a few years of experience and he’s got over a couple of injuries as well. He’s looking great out there. He’s put on a bit of size as well, he’s looking huge. So he’s using that size to his advantage and creating a lot of havoc. Hopefully we can cause some havoc together.” They did.

Cameron Munster on kicking Liam Martin in Origin I. “I know the person I am, I’m kicking myself.” All even on the card then!

Two-time Olympic silver medallist Maddie Groves, announcing she would not be going to the trials for the Tokyo Games: “Let this be a lesson to all misogynistic perverts in sport and their boot lickers. You can no longer exploit young women and girls, body shame or medically gaslight them and then expect them to represent you so you can earn your annual bonus. Time’s UP.” Is she OK? And I mean that seriously. That level of upset needs careful follow-up.

Team of the week

Tom Trbojevic. Imperial, without being imperious. Scored three tries for NSW in Origin I and seemed … rather pleased.

The Illawarra Hawks. Had a good win over the Perth Wildcats in game one of the NBL semi-final series. If they win on Friday night, they will be in the grand final – the whole thing a credit to the redoubtable Brian Goorjian who took over a team in last place, and now has them on the edge of glory days. He is said to be getting interest from the NBA on the strength of it. I should insult him, whereupon he can go off in a huff and end up with the Chicago Bulls. (See Postecoglou item.)

Serena Williams. Running out of chances to win that elusive 24th grand slam. Since she won her first in 1999, her previous longest drought without a win was nine. It’s now been 16 slams since her last title.

Joe Montemurro. The Australian leaves his position as coach of the Arsenal women’s side to take over at Juventus.

Neale Daniher. The ailing AFL legend’s FightMND charity is nudging towards raising $2 million to help combat motor neurone disease. The feature match between Melbourne and Collingwood, called – appropriately enough – the Big Freeze, was moved from Melbourne to the SCG this public holiday Monday. Daniher is from the Riverina and once played with all three of his brothers at Essendon.