Adam Reynolds says there is plenty of temptation to join Cronulla and he has a lot of respect for Craig Fitzgibbon, whom he met this week and knows from their time together at NSW Origin camp.

As legendary No.7s Andrew Johns and Johnathan Thurston expressed disbelief that Souths were willing to let their captain leave, Reynolds told the Herald about his midweek catch-up with the incoming Sharks coach. 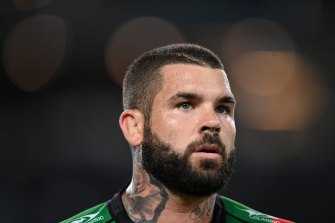 “Security is a big thing for me. One-year or a three-year deal? There’s a big difference.”

There have been reports this week about Cronulla preparing to offer Reynolds a three-year deal worth about $2.4 million. Souths are refusing to budge on their one-year extension.

Reynolds played another big role against the Raiders as Souths marched to a seventh straight victory in the nation’s capital. His radar-like right boot kicked all seven conversions. 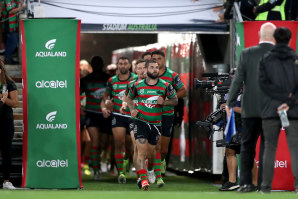 The skipper leads Souths into action at GIO Stadium on Thursday night.Credit:Getty Images

The 30-year-old said he was not sure when his future would be sorted and “I have no idea how long it will take – we’re no closer than we were last week”.

“While I’m in the red and green jersey it’s my job to perform and play well,” he said.

Johns and Thurston said during Channel Nine’s coverage of the Raiders game they could not understand how Reynolds, who grew up across the road from Redfern Oval, could not be accommodated at the club long-term while still such a dominant force.

“I can’t believe he’s not signed, a local junior, he’s played all his footy there and a premiership-winning halfback and he’s on the open market,” Thurston said.

Johns took aim at the NRL’s “flawed system”, saying it should reward long-serving players like Reynolds by having his entire salary excluded from Souths’ cap. As it stands, clubs have less than $200,000 to spend outside the cap on long-serving players.

“You’ve got a local junior who’s played 10 years in first grade and the last year or two should not even be on the cap,” Johns said.

Reynolds said Souths needed to improve their starts if they hoped to turn the tables on fellow heavyweights Melbourne on Thursday night.

The Storm raced to a 22-0 lead before clinging on for a 26-18 victory against Souths in the season opener.

“They’ve had the wood over us for some time now,” Reynolds said.

Lock forward Cameron Murray had scans on the left ankle he injured while making a tackle on Hudson Young in the first half against Canberra, which also forced him to undergo a head injury assessment.

“I didn’t feel anything, I got up and it was sore to walk on. I’m hoping for the best,” he said.

April 30, 2021 Rugby League Comments Off on ‘He says all the right things’: Reynolds tempted by Fitzgibbon’s Sharks vision
NFL News