Geelong premiership captain Tom Harley had a cup of tea with Frank Costa and his wife Shirley about four weeks ago as it became apparent that Costa’s health was deteriorating.

The 42-year-old Sydney CEO sat with the octogenarian and inevitably talk centred, as it always did, around family. Costa never failed to ask, and his pride in his own family was as evident as ever, with his pride in others’ achievements always taking priority over his own. 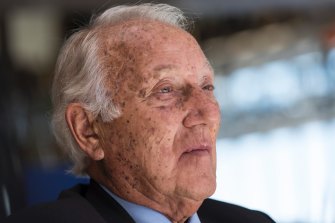 Frank Costa is one of the most influential figures in Geelong Football Club history.Credit:Josh Robenstone

It was only as his football career neared the end that Harley realised how fortunate he had been to be exposed to Costa, who taught him plenty about leadership as he took over as Geelong captain in 2007 and led the Cats to a drought breaking flag with Brian Cook as CEO and Mark Thompson as coach.

“He was a remarkable man, unbelievably generous, and anyone who was fortunate enough to spend any time with him always left a better person,” Harley said.

In his playing days, the skipper knew to answer whenever Costa’s name flashed up on his phone, not through obligation but rather a warm respect. When he answered on the eve of the 2007 finals, Costa locked Harley in to visit a lifelong supporter in Ballarat after the season finished and joked that the premiership cup would be a welcome passenger too.

That 2007 premiership meant so much to Costa because the drought-breaking win meant so much to Geelong, with Costa upsetting a few people who lived near his offices in town when he rang the bells all night to celebrate victory.

Along with Cook, they had dragged the club from the brink of receivership to the best club in the competition, with Cook’s respect and adoration for Costa never ending, even if the late president’s willingness to talk to everyone and anyone during his reign, including journalists sometimes, caused him a wry chuckle.

“Once you shook hands with Frank that was it. His word was worth everything,”

Cook said on Sunday that without Costa’s influence it isreasonable to ponder whether the Geelong Football Club would exist.

Costa’s good-natured successor as Geelong president, Colin Carter, remembers being invited to a cup of coffee with Costa where he told Carter he wanted him to take over the job he had held since 1999.

Such invitations became legendary as Costa convinced people to join him in doing the right thing across a range of areas including sport, health and community, with the three often intertwined.

“I was the subject of one of the infamous cups of coffee with Frank where, when it became pretty clear what he wanted, there really wasn’t much choice in it and I am really grateful to him for lining me up because it was a wonderful adventure for me,” Carter said. 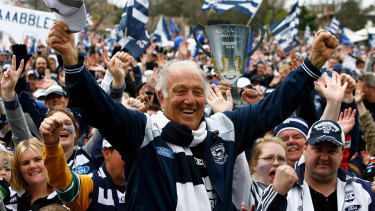 Carter’s gratitude at being anointed for the role that had transformed from being a poisoned chalice to become a gift was realised early as Geelong won the flag in 2011 in his first season at the helm, and then remained in contention for the next decade.

Costa had rebuilt the club on the same foundations he had built his life and fruit and vegetable business – with an emphasis on family, faith and character.

Costa embedded the notion that holding and living the right values were critical for an organisation to succeed because without them, all the skill in the world would flounder.

“His business was built on the notion you hired for values and you trained for skills,” Carter said. 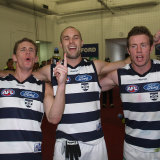 It was a notion that helped former Cats board member Bob Gartland establish his own business in a friendship with Costa that stretched 40 years, the importance of character driven into him at every turn.

“Once you shook hands with Frank that was it. His word was worth everything,” Gartland said.

An emotional Gartland recalled with fondness Costa pulling a small notebook, one crammed with appointments and names, out of his pocket to lock in a time to meet. Gartland knew to accept that opportunity, always privileged to be in Costa’s company as countless people found themselves at one time or another, regardless of their background

“He was a people person. He loved people and people loved him,” Gartland said.

May 2, 2021 Rugby League Comments Off on ‘He had a great gentle persistence’: Frank Costa remembered
NFL News