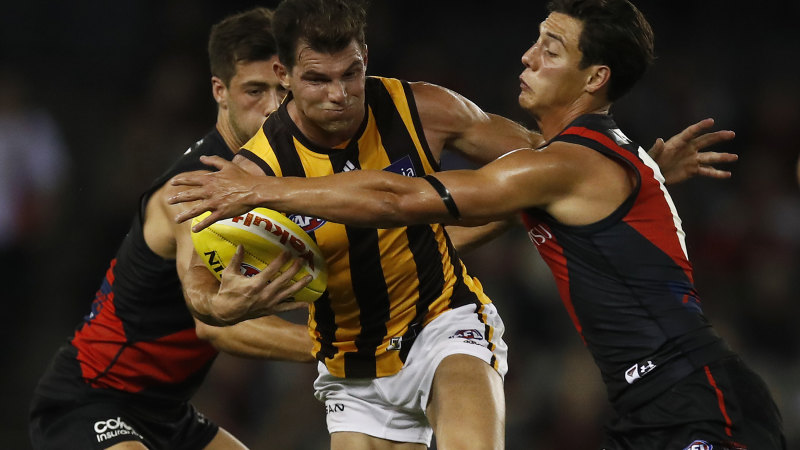 Hawthorn are keen to relocate their scheduled round 14 match against Essendon to Tasmania if crowds are not allowed at the MCG next Sunday.

Fresh off an upset win against Sydney on Friday night and with the Bombers still an outside chance to challenge for finals, the match between the modern-day rivals would attract significant interest but the question of how many spectators would be allowed into the MCG next Sunday remains unanswered.

Hawthorn are not pushing for the game to be in Launceston, where they are contracted to play four home games a season, but would prefer to play there in front of crowds rather than at an empty MCG, and the AFL is open to the idea if restrictions on crowds remain tight.

Sources said the AFL had made submissions to the Victorian government for 50 per cent capacity at the three games scheduled to be played in the state in round 14 but are still waiting for a decision after Melbourne had restrictions eased on Friday following a two-week lockdown.

The league is confident in their contact tracing and management of crowds after two people who were diagnosed with COVID-19 were found to have attended games at the MCG and Marvel Stadium in round 10 but no further cases from those games were detected. But, as the AFL has done for the past 18 months, they will plan according to advice from the state government.

If Hawthorn were to play Essendon in Tasmania it would be one of the most attractive fixtures played there with the Bombers having a big supporter base throughout the country. Essendon rescheduled the Dreamtime at the ’G fixture against Richmond to Optus Stadium in Perth and the match was sold out. Hawthorn have games against Fremantle and the Western Bulldogs scheduled in Tasmania later in the year.

The Hawks did not play in Tasmania in 2020 and are waiting for a report into the future pathway of a standalone AFL team in Tasmania before being able to negotiate an extension of their deal to play games in Tasmania beyond this season.

The AFL is also understood to be contemplating whether to reschedule a game from round 14 into the Thursday night timeslot that is now vacant after the West Coast v Richmond match was brought forward to Sunday night to allow the Tigers contingent on the road to return home earlier.