Geelong will go back to the drawing board with star forward Jeremy Cameron to help him overcome his troublesome hamstring, ruling him out for “several weeks” after scans revealed he tore the muscle against Essendon on Friday night.

It is the third time Cameron, who joined the club as a free agent from the Giants this season, has suffered a hamstring injury this year and the Cats will be desperate for him to have left his troubles behind him as they head towards finals. 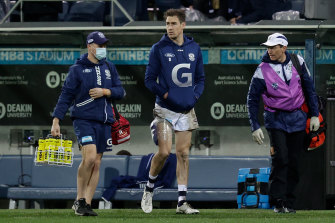 They have matches against Carlton, Fremantle in Perth and Richmond in the next three weeks but are expected to be conservative in his management with finals looming.

Geelong football manager Simon Lloyd said getting the 28-year-old, who spent the first five weeks sidelined at the start of the season, right will be vital.

“Our medical and conditioning teams are working closely with Jeremy on his rehab program. It will be a matter of monitoring how he progresses to then determine a timeline on his return to football.”

Cameron has been outstanding at Geelong, kicking 28 goals in 10 games and forming a dangerous combination with veteran forward Tom Hawkins and speedster Gary Rohan.

However, his ability to train has been limited as the Cats tried to nurse him through the season.

He told reporters on Saturday the injury was frustrating but he remained positive.

“I’m going to use the opportunity to freshen up and get ready for the right time of the year,” Cameron said.