Parramatta captain Clint Gutherson wants his players to embrace the challenge of ending the Eels' rotten NRL finals run, a barren sequence which includes a decade between wins.

Parramatta's elimination final against Brisbane on Sunday will be just their third finals match this decade, a time frame which also features three wooden spoons. 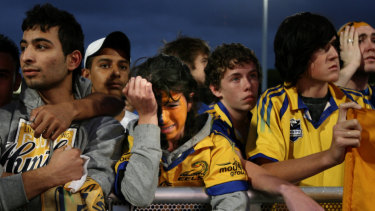 Heartbreak: Disappointed Eels fans watch their side lose the 2009 grand final. Little did they know the finals drought that loomed.Credit:Edwina Pickles

The Eels haven't won a finals match since they beat Canterbury before a crowd of almost 75,000 at ANZ Stadium in September 2009.

That was right in the middle of the Jarryd Hayne show, as they progressed to a grand final against Melbourne where they were eventually beaten.

But after crashing out in straight sets in their only appearance since then in 2017, Gutherson wants his players to embrace the occasion.

"We know what happened last time we were in the finals, we went out in straight sets," Gutherson said.

"But you have to embrace it. It comes with the pressure and the nerves.

"Nerves are a good thing. It means you care and you want to go out and win."

Gutherson missed the Eels last finals series two years ago after he was struck down by a season-ending knee injury. 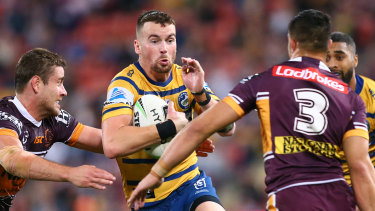 Do or die: The Eels’ season goes on the line against Brisbane in the elimination final.Credit:Getty Images

Two years on the fullback has been integral to Parramatta's significant turnaround which sees the Eels become the first team to rebound from a wooden spoon to the finals since Cronulla in 2015.

"Everyone has had a look at themselves. We knew the team we had last year was a lot better than what we showed.

"Everyone is just excited now. It's do-or-die for us now, we have to go out there and perform."