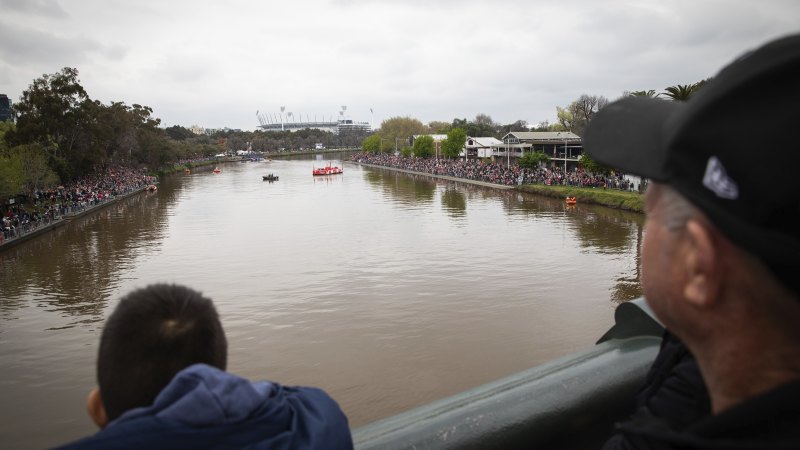 On the penultimate day of an AFL season like no other was a grand final parade quite unlike any before it – the first and, perhaps, the last of its kind, too.

Instead of the traditional motorcade down the streets of Melbourne, hundreds of thousands of people, including a healthy number in red and white, lined the banks of the Yarra River to catch a glimpse of the two teams who will square off for the game’s ultimate prize on Saturday afternoon. 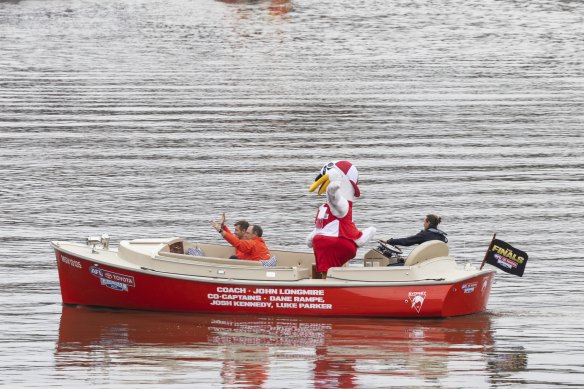 It was a great idea on paper. But in practice, it didn’t quite work. Not only were the sight lines less than ideal for fans, who were much further away from the players than they would have been had they been on the road as usual, but the flotilla carrying them turned around 800 metres earlier than planned. The mix-up robbed some people, like Swans diehards Julie Conlan and her partner, Di, who live in Rozelle and travelled down to Melbourne for their first grand final, of the chance to see them at all.

“We were there 45 minutes, an hour. And they turned early! Hundreds of people [missed out],” said Conlan, standing on the Princes Bridge over the Yarra, below which the boats were supposed turn.

Some called it a disaster, on par with Angry Anderson’s infamous Batmobile from the 1991 AFL decider. But for Conlan, who has followed the Swans for roughly 10 years, it still couldn’t dampen the occasion.

“Going down the river, I’m amazed they hadn’t done that before,” she said.

If the AFL is to persist with this on-water parade concept in future years, they clearly have some work to do to iron out the kinks. 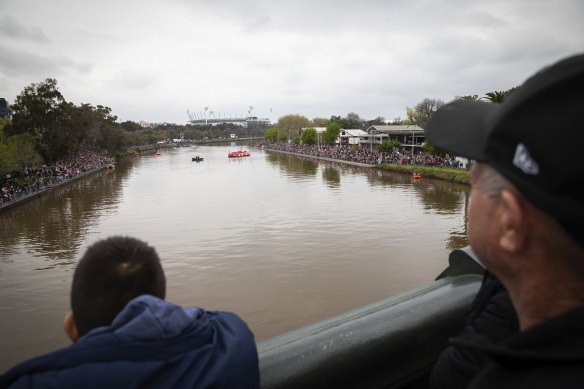 Crowds flocked to the banks of the Yarra River to see the AFL grand final players on boats – but they needed binoculars to get a proper glimpse.Credit:Paul Jeffers

But as the city of Melbourne soaked in the second day of a four-day long weekend, and the build-up to the first grand final at the MCG in three pandemic-wrecked years, nothing could wreck this experience they’d waited so long for, and the return of the sort of pomp and ceremony that makes grand final week so special.

Eventually, Sydney and Geelong players hopped out of their boats and onto the back of utes which weaved their way through Yarra Park, where the AFL has set up a “footy festival” extravaganza where pre- and post-game celebrations and commiserations will take place. Both teams and their coaches, John Longmire and Chris Scott, were presented on stage in front of a huge number of Swans and Cats fans, plus plenty of others wearing colours of the clubs that didn’t make it. There were people as far as the eye could see, and some camped near the front for hours to get a good vantage point.

“Look around you everyone – soak it up, soak up the sounds, the sights, the atmosphere of the grand final back in Melbourne … where it belongs,” said acting Melbourne lord mayor Nicholas Reece.

The Swans are considered the underdogs, but Conlan, who was part of the crowd that was thrilled by last weekend’s nail-biting preliminary final at the SCG, reckons they’re in with a real chance of upsetting the locals.

“It’s two different teams, two different styles of football. Geelong are on a winning streak, 15 games or something, but we’re improving,” she said.