Greater Western Sydney exorcised their MCG demons against a hapless Melbourne outfit on Sunday with a comfortable 26-point win that saw them re-enter the top four.

The Giants had lost 14 of 16 games at the venue, but just a fortnight after producing their worst ever performance there against Hawthorn, according to their footy director Jimmy Bartel, they experienced few issues as they kicked 10 of the first 11 goals before running out comfortable 14.10 (94) to 10.8 (68) winners in front of just 20,023 spectators. 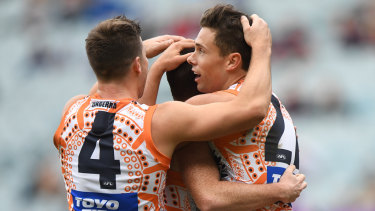 Josh Kelly celebrates a goal with his Giants teammates.Credit:AAP

It was an important result for GWS, from a psychological point of view more than anything, given the MCG hosts the biggest final of all, and they have had no shortage of critics doubting their premiership chances due to their woeful record at the home of football.

On the flip side, Melbourne were nothing short of insipid for most of the afternoon, barring a face-saving final term, with their lack of conviction, particularly in the first half, bordering on apathetic as they could only manage three goals in the first three quarters.

The Giants did as they pleased and at half-time they had almost doubled Melbourne for uncontested possessions (133-71) and more than doubled them for inside 50s (34-16), eventually winning those stat counts 248-175 and 50-47 respectively. The Demons were stagnant and reactive while GWS, led by the likes of Josh Kelly, Tim Taranto and Lachie Whitfield, played on at all costs.

The Demons were lucky to only be down by 35 points at half-time, given GWS had 14 scoring shots to four at that stage of the game, and they were afforded no such mercy after the major break as the Giants, led by Harrison Himmelberg (career-high five goals), sharpened up in front of goal to make the scoreboard accurately reflect the gaping chasm in quality between the two teams. 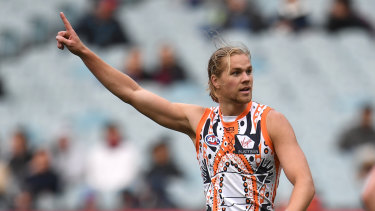 Melbourne booted seven goals to two in the final term, but it would’ve served as cold comfort to their fans and coach Simon Goodwin.

Early in the second quarter, with Melbourne trailing by only 10 points, Bayley Fritsch took the kick-in responsibility, but unfortunately for him he booted it straight to Giants forward Jeremy Finlayson who duly sent the ball back over Fritsch’s head and through the big sticks. It sparked a run of eight consecutive goals for GWS, who enjoyed a 57-point lead by the time it came to an end midway through the third term when Jeff Garlett kicked a six-pointer for Melbourne – which was greeted by bronx cheers.

If Essendon thought their half-time score of 1.7.13 at the MCG on Saturday night against Richmond was bad, then they should spare a thought for Melbourne, who could only muster 1.3.9 after two quarters on Sunday. At least the Bombers had the excuse of playing in torrential rain – the Demons were greeted with perfect conditions. It was Melbourne’s worst half-time score in more than four years.

With his team already enjoying a comfortable 39-point lead early in the third quarter, you could’ve been forgiven for thinking GWS defender Nick Haynes thought the game was still in the balance. Haynes courageously flew back with the flight of the ball at centre-half-back and took a superb mark before being crunched by Tom McDonald coming the other way for his troubles.

After Jayden Hunt kicked Melbourne’s first goal, Clayton Oliver gave away a free kick to Josh Kelly before the re-start. But instead of being allowed to flood back, as would have been the natural inclination in previous seasons, Melbourne players, as well as their GWS counterparts, had to maintain the six-six-six formation. It caused quite a bit of confusion as it took many seconds for the umpires to clearly explain to the players what was going on.