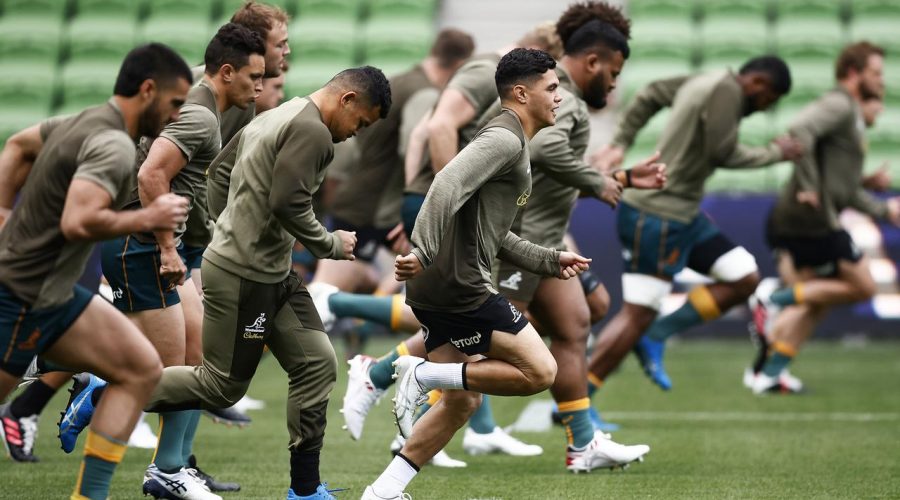 Three Test matches in the space of a week has forced the Wallabies to do less training and could mean a significant rejig for the third and final clash with France in Brisbane on Saturday.

But captain Michael Hooper declared they were decisions for “late Tuesday night”, with the Wallabies planning to “hurt” the visitors in the second match of the series in Melbourne.

The tight schedule is a new one for the Wallabies, who started the series with what coach Dave Rennie labelled an “unimpressive” 23-21 victory last Saturday.

But while Rennie hasn’t been able to put his charges through a full week of work to get ready for a second-up effort, Hooper said the intensity at the reduced number of sessions had spiked.

With the same 23-man outfit given a chance to improve, save for a change in the starting front row, Hooper said the players had “gone after it” at training and were primed for a better showing at AAMI Park.

“We want to improve significantly this week … we think we can hurt these guys,” he said on Monday.

“We’ve had to reduce training numbers but not drop intensity. When we have been on the park, we have gone after it.

“We need to have a physical presence, and sometimes there’s only one way to do that, and that’s to get into it at training.”

Taniela Tupou should be first on the team sheet every game. By far the best player the Wallabies have. Others would do well to match his aggression.

France have not won a Test in Australia since 1990 but charged out of the blocks in Brisbane last Saturday, forcing the Wallabies to come back from a 15-0 early deficit.

Taniela Tupou has been injected into the starting line-up, with the French also making a front row move, bringing in 192cm, 130kg giant prop Wilfrid Hounkpatin. At just 178cm, Tupou is giving away some height but nothing in the weight category at a tick over 130kg himself.

“It’s a lot of weight up front for both teams,” Hooper said.

The skipper couldn’t commit to playing another full 80 minutes when the teams clash again next Saturday.

But he said he wasn’t thinking that far ahead as the Wallabies look to seal a series win in Melbourne first.

“It’s going to be a really great challenge, a four-day turnaround, a lot shorter than normal Test rugby,” Hooper said.

“But there’s a lot of variables there, I can’t give you an accurate version. We want to put our best team on the field every week and in this case every four days.”