Voting for the AFLW’s best and fairest award has come under criticism after the All-Australian captain, North Melbourne player Jasmine Garner, missed the top 10.

Fellow players have questioned how AFL Coaches Association Player of the Year award winner Garner could be so far off the pace in counting for the W Award, won by Brisbane’s Ally Anderson.

Garner’s teammate Emma Kearney, the AFLW veteran who won All-Australian selection for a record seventh season, said the sentiment from players was that Garner had been unlucky.

Like the Brownlow Medal in the AFL men’s competition, voting for the AFLW best and fairest is done by field umpires. 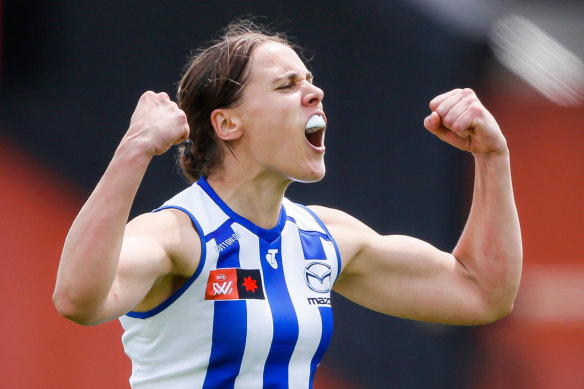 Players from all sides of the league were coming up to the Kangaroos’ table at the Crown Casino count, Kearney said.

“[They came up to say] ‘geez, Jas has been a bit unlucky here’,” Kearney said.

“We weren’t shocked by Anderson winning. I think she’s had a tremendous year, and is a deserving winner. We were more shocked by the lack of votes Jas received. She was clearly one of the most outstanding players all year.”

It took until round five of the vote count – nearly halfway through the season – for Garner’s name to be called out, despite the 28-year-old receiving votes in every round in the AFL Coaches Association Player of the Year award.

Players, fans and journalists took to social media to express their surprise, among them Collingwood’s Steph Chiocci, who wrote: “Is Jasmine Garner invisible in games or am I (and many others) missing something???” ,

By all measurements, Garner had a superb season. She was North Melbourne’s leading goalkicker (for the second season in a row), ranked first in the league for inside 50s, and held a career-record of 296 disposals.

Moreover, it was Garner’s second season in winning the coaches’ award, polling five perfect scores (two of which were in round one and two) and votes in all but one match, resulting in 76 votes.

This year’s W Award count was not the first time that Garner had arguably been under-recognised by the umpires.

“In 2020, she won pretty much every individual award on offer – but only polled four votes [for the best and fairest],” Kearney said.

Kearney theorised that Garner’s playing style, which involves a lot of “grunt work”, meant she could’ve gone unnoticed by umpires on the outside. 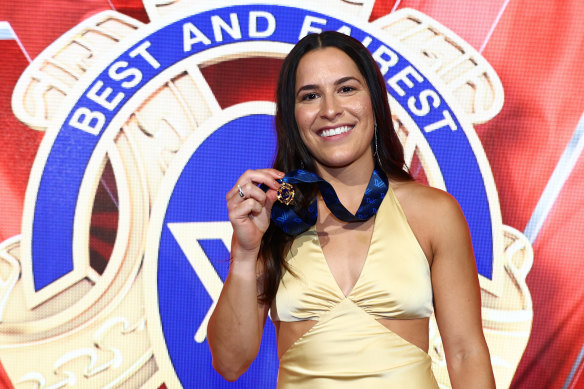 Anderson, somewhat of a surprise winner of the best and fairest, polled 21 votes after a tight count between Richmond’s Monique Conti (19 votes) and Adelaide’s Ebony Marinoff (18 votes). Anderson did not make the All-Australian team and finished 11th in the coaches’ award. The Brisbane Lion was picked in last year’s All-Australian team.

The AFL’s time-honoured Brownlow Award for the men’s competition has in recent years been critiqued over its own voting pattern.

The medal has been colloquially dubbed by some as the ‘midfielder award’. At this year’s Brownlow, won by Carlton’s Patrick Cripps, midfielders formed the entire top 20 of the leaderboard.