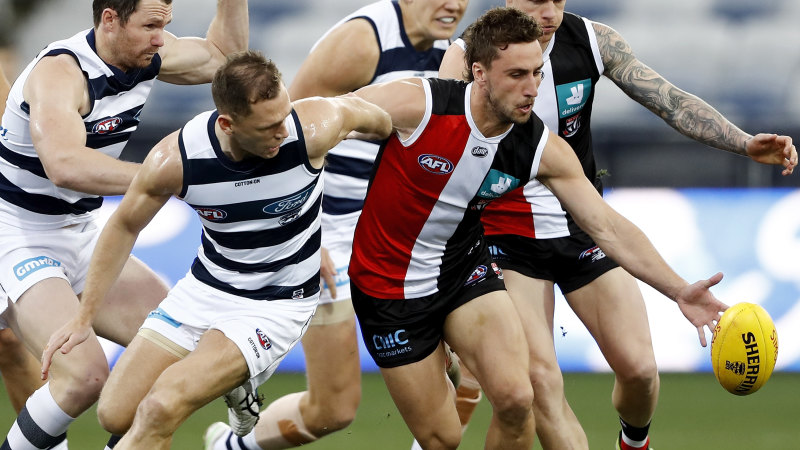 Geelong will play Melbourne for top spot on the ladder in the final round after overcoming a shaky start to end St Kilda’s finals hopes at GMHBA Stadium with a 14-point win.

It took until the final five minutes of the match before they were assured of victory as Patrick Dangerfield – who may come under notice for rough conduct after an incident in the final quarter – and Jeremy Cameron kicked the final two goals of the match.

The Cats made it hard for themselves when they conceded the first five goals of the game as emerging Saints star Max King ran riot. King grabbed five marks and kicked two goals in the first 26 minutes before injury (he had battled an adductor problem leading into the game) temporarily forced him from the ground. 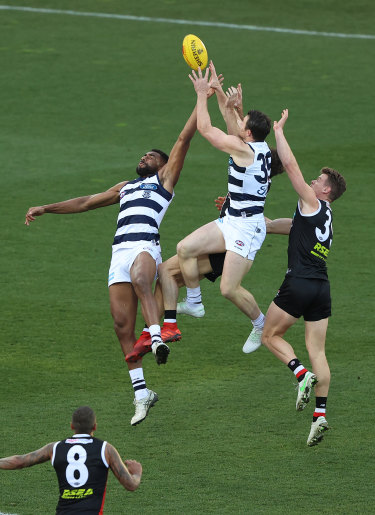 The injury became a sliding doors moment for the Saints as the key forward returned but could not have the same influence as he was restricted to just two more touches for the match as the Saints could only kick six of the next 19 goals of the match.

His absence not only gave his direct opponent Jack Henry a sigh of relief it also opened the door for the Cats to shift momentum. They kicked the final two goals of the quarter to stabilise before quarter time and began to chase down the Saints lead.

King returned eight minutes into the second quarter but found himself with a new match-up in Mr Fix-It Mark Blicavs while Chris Scott also moved Mark O’Connor on to Jack Steele to reduce his influence.

Steele had gathered 13 touches and laid three tackles in the first quarter forming a combination with Luke Dunstan that the Cats were finding hard to counter as the Saints won contests to keep the ball in their half of the ground.

While O’Connor kept him busy, Sam Menegola and Cam Guthrie lifted for the Cats as the defence – despite being without Tom Stewart – looked more solid with Blicavs taking on the key job on King.

They began to win the contested ball and found the returning Cameron an effective target. Cameron kicked three goals in the first half to drag the margin back to within a goal at the long break.

The Saints didn’t wither before disappearing like they did earlier in the season and kept responding whenever the Cats threatened to take control after they hit the lead at the 14-minute mark in the third quarter when Sam Simpson kicked a goal, a slender lead that soon stretched to eight points.

They kept annoying the Cats staying within a goal for most of the final quarter as Dangerfield lifted to will the team over the line. He finished with 24 contested possessions and it was his mark in the goal square late in the match that gave Geelong the gap they needed to control the final four minutes of the match.

The win effectively ends the Saints season while Geelong will look to finish top two if they can beat Melbourne at home in the final round. They will be hoping their three-pronged attack including Cameron, Tom Hawkins and Gary Rohan can be reunited ahead of the finals as they hold the key to the Cats’ flag chances.

Keep up to date with the best AFL coverage in the country. Sign up for the Real Footy newsletter