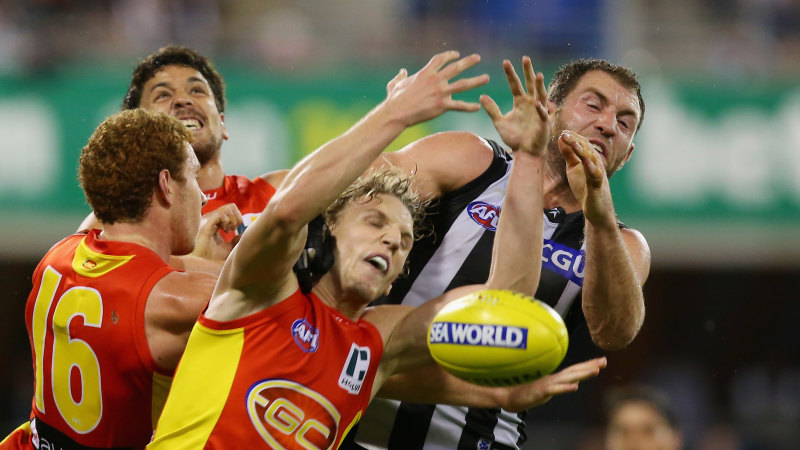 Patchy Pies get a lesson

FOR years, Collingwood boasted of not having a tagger. Why bother when you have a midfield featuring Dane Swan, Scott Pendlebury, Dayne Beams and Luke Ball? That was until this year, when coach Nathan Buckley decided to groom utility Brent Macaffer, coming back from a knee reconstruction, for the role. 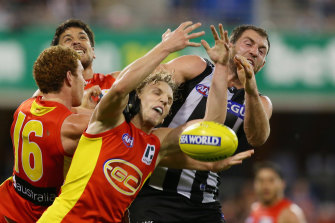 Trent McKenzie of the Suns and Travis Cloke of the Magpies compete for the ball.Credit:Chris Hyde/Getty Images

So the expectation was, going into the match against the Gold Coast Suns, that Macaffer would go to Gary Ablett. But Buckley instead decided to roll the dice, playing Macaffer as a defensive forward against the Suns’ other weapon, Trent McKenzie, and letting his best midfielders worry about Ablett.

Well, whether Macaffer might have made a difference or not – and he was beaten badly by McKenzie – it backfired. You can chalk up another three votes for Ablett. He had 27 possessions to half-time alone, finished with 49, and kicked two goals in one of his greatest performances.

The second goal was a gem, kicked on the burst out of traffic from 50 metres, and giving the Suns a 21-point lead in the last quarter. That was enough, and it was a deserved result, too: the Suns led for most of the contest, had most of the best performers, and did it all without several of their best players, especially up forward.

The Suns had to withstand a late charge, with goals to Paul Seedsman and Beams bringing the margin back to seven points. But the longer this game went, the less likely Collingwood looked. The Magpies have come back from worse positions in their past two games, but this would have been a real steal.

Jaeger O’Meara had another outstanding game, kicking three goals from 23 possessions, including a set shot threaded from beyond the boundary line in the third quarter, a dagger to Collingwood‘s heart.

McKenzie, Jarrod Harbrow and Harley Bennell, who returned to his creative best, were all exceptional. 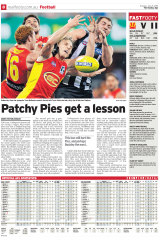 The match report published in The Age on July 20, 2013.Credit:The Age Archives

Collingwood‘s best players all won a truckload of the ball: Beams had 34 possessions and nine clearances in just his second game for the year, Swan had 32, Pendlebury had 28, and outstanding rookie Sam Dwyer had 31. Yet still, they couldn’t find a way to goal.

It didn’t help that Travis Cloke has another serious case of the yips, kicking four behinds and another that didn’t make the distance before half-time They were chances that, it turned out, couldn’t afford to be gifted. Likewise two 50-metre penalties that resulted in goals to Sam Day.

Regular centre half-back Ben Reid wasn’t sent forward until the last quarter, despite the presence of Lachlan Keeffe, in his first game back from a knee reconstruction. Again, Reid had an immediate impact, marking and goaling early in the last quarter, but it was too late. He hit the post – the Magpies’ fourth for the game – after that.

It’s getting tiresome – and will very soon be redundant – to say this was the Suns’ best win in the AFL, though Collingwood is probably its biggest scalp to date. They’ve already beaten some very good sides, pushed many others, and probably should have won a couple more games already this season.

But there’s no argument that this was a major breakthrough: a win against a top eight side, whose season was finally appearing to gel. This loss will hurt the Pies, and perhaps Buckley the most, but perhaps it also proves the immaturity of this Collingwood line-up.

Their patchy performance was symptomatic of a team with so many young players. Doubtless, a few of them thought this win would just happen.

Collingwood: Brown (groin) replaced in selected side by Keeffe.

Jamie Elliott put his hands up for another mark of the year contender, with a soaring grab in the first quarter that knocked the wind out of his sails. It was one of the few highlights for the Pies.

Defender Nathan Brown was a late withdrawal for Collingwood with groin soreness, allowing the 204-centimetre Lachlan Keeffe to make his return from a knee reconstruction.

SUN ON THE RISE

Matt Shaw became the second non-imported Sun to notch 50 games. In 2½ years, the blond has blossomed, a consistent ball winner and tremendous runner who has significantly improved his disposal and decision making.

Gary Ablett once again stole the show with a scintillating game-high 49 disposals – four short of equalling his previous best effort which was also against the Magpies in 2012. He recorded 20 contested possessions, 10 clearances, six inside 50s and two goals.

The Suns had the better of the Magpies at the centre bounces, generating 15 clearances to their eight, with Jaeger O’Meara and Dion Prestia recording three apiece. Gary Ablett led the way with four of his own.

Travis Cloke’s poor conversion rate once again let him down, returning 2.4 for the match.

April 30, 2021 Rugby League Comments Off on From the Archives, 2013: Ablett leads Suns to win over patchy Pies
NFL News