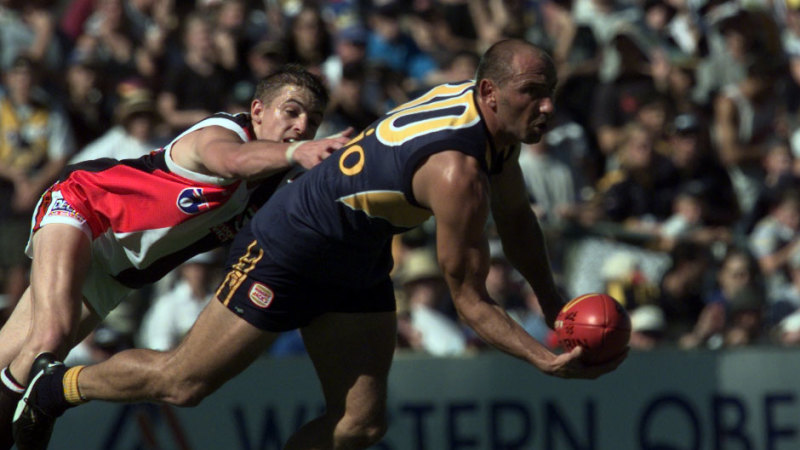 Football contests can often end in the most spectacular fashion, but when a sustained 120-minute duel comes down to just 60 seconds of good fortune, then the emotions are mixed. 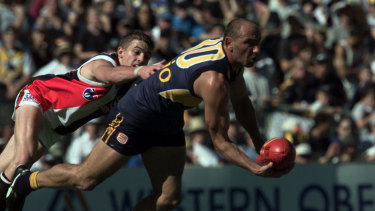 Most of the crowd of 36,152 were stunned when the final siren signalled a two-point victory to St Kilda yesterday.

Mind you, the penalty that Kennedy imposed on Eagles defender Ashley McIntosh for holding the ball under his body in a forward pocket pile-up was justified. It was just the time and place that didn’t sit well with Eagles fans.

Former Fremantle on-baller Gavin Mitchell sealed the victory by steering the free kick through from 20 metres.

In fact, it was four premiership points that got away from West Coast, which twice led by 27 points – near the end of a tremendous third quarter and halfway through the fourth term. After being down by 20 points approaching half-time, the Eagles’ recovery was commendable; but the Saints’ revival with six of the last seven goals and two in the final two minutes gave coach Stan Alves his greatest victory. 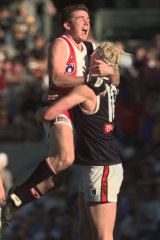 There were many reasons for celebrations apart from the fact that it was the Saints’ second successive win against West Coast in Perth.

It was a double birthday celebration, with Peter Everitt, the extroverted ruckman who sported new blond dreadlocks for the occasion, best-afield on his 24th birthday. He not only shared best-player honors with South Australian recruit Daniel Healy, who also entered the world on 3 May 1974, but both players finished with six goals.

“They gave me the birthday present,” quipped Alves as he praised the players for their persistence, their courage and their ability to survive the warm conditions.

He led the ruck and held the honors over a hard-working Michael Gardiner; he filled in at full-forward to be a reliable spearhead and his marking and creativity around the ground was inspirational.

Healy, one of the best kicks in football, wasn’t far behind as he bobbed up everywhere in attack, while the midfielders, Robert Harvey, Aussie Jones, and Nicky Winmar, never stopped trying.

West Coast had its heroes, too.

The enormous influence of Glen Jakovich on the Eagles’ fortunes was never more evident than in the team’s third-term reversal.

The mere fact that the nation’s best centre half-back opened the third term at full-forward seemed to inspire the side.

The Eagles struggled to find goals in the first half, with Max Hudghton curbing Fraser Gehrig, while the Wakelin twins, Darryl and Shane, had the brakes on dangerous forwards McIntosh and Chris Lewis.

Jakovich, who had filled in as a ruckman for a while as well, spent just 10 minutes at full-forward and that seemed enough to spark the Eagles. He returned to defence to continue his dominance, but the revived forwards presented a new image.

Andrew Donnelly, who came off the bench in the second term to grab a handy goal, added four more in the second half and his three-goal third term was the difference.

Gehrig got on top of Hudghton and broke open the tight defence, marking in the square to bring up the team’s eighth goal at the 10-minute mark.

Despite the efforts of Everitt and Healy, the Eagles extended that to 27 points before the steam ran out of the machine.

When Luke Beveridge goaled on the run and Healy marked close in, the Eagles were still in control, but a couple of inspirational goals from Everitt, including one where he roved his own ruck work, cut the margin to four points.

Anthony Lovell brought the crowd back to life to make it 10 points, but Jones, who had run hard all day, turned the scales back again with just one minute 52 seconds left.

Robert Harvey v Drew Banfield: One of the few contests that remained constant throughout a much-changing match. The Saints star worked tirelessly as usual to gather more than 30 possessions, but the close-checking Banfield was never far away and showed he could match the Brownlow medallist for stamina.

Guy McKenna v Jason Heatley/Daniel Healy: Deputising as skipper gave McKenna extra responsibility and the task of standing alongside his former Eagles teammate in the goalsquare came with that. He saw Heatley off to the bench early on, only to be matched up with Healy, who finished up as a major destroyer of the Eagles defence.

Stan Alves (St Kilda): “This game was won by courage and character; they never lost belief in themselves; they kept at it and that’s why I’m so proud of them. It was the best win I’ve been associated with as coach.”

Guy McKenna (standing in for Eagles coach Mick Malthouse): “It wasn’t flash; five goals up. Good sides don’t lose those games; bad sides do and today we were a bad side.”

Gavin Mitchell (St Kilda): It was a mixed day for the former Western Australian player. While he has settled in well at St Kilda, nothing went right for him on his first homecoming match – except for the final 60 seconds when he received a free kick in the forward pocket and kicked truly to give his side an unexpected but important victory.