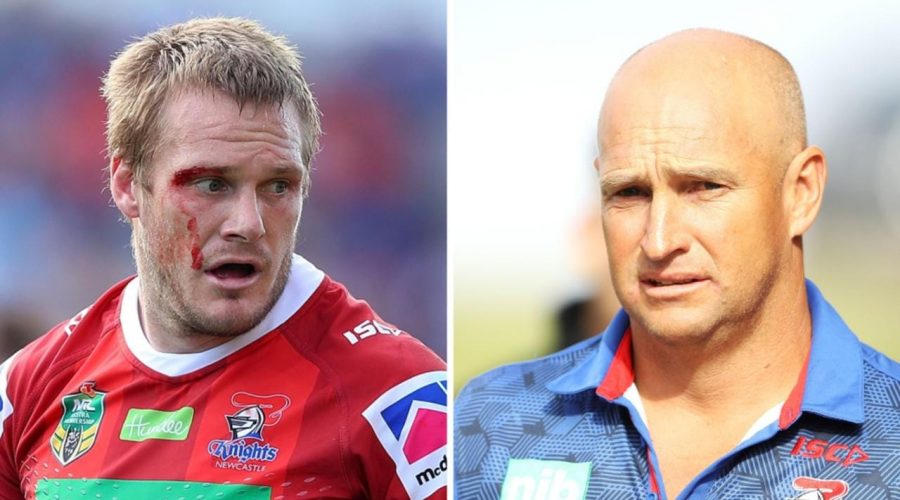 Former Knights fan favourite Nathan Ross has lifted the lid on the injuries that led to his medical retirement, claiming then coach Nathan Brown called him “weak” after he tore both groins and had hernias in his stomach.

Ross retired in 2019 after battling through the 2018 season with a multitude of injuries.

Speaking in a podcast with the Newcastle Herald, Ross revealed that in his final year – where he played 15 games – he was struggling with “severe injury” in 10 of those.

“He led me in the wrong direction in terms of what the injury was.

“I tore my groin against Brisbane, and I got told that there was nothing wrong there and that I was being weak and to harden up.

“I strapped my right groin, then my left tore. Once again I was told nothing was wrong there, I was being sent for the wrong treatment.

“The physios were doing the best they could, but what happened from there is I ended up having hernias in my stomach.

Nathan Ross runs the ball for the KnightsSource:News Corp Australia

“Then I completed tore my pelvis ligaments off the bone. It was pinching the nerves, but I was training one day and I could barely run.

“My genitals went numb because the nerves were being pinched inside my pelvis. I went to the head of performance and he told me to run it off.”

With Ross’ injuries allegedly misdiagnosed, he claims he was pushed to play on.

“As soon as you challenge our manhood it’s like a red rag to a bull,” he said.

“We just try and push through it. I kept pushing through it until against Cronulla, I stepped off my left foot and it felt like my bowels had fallen out my backside.

“I came in at halftime with numbness down my legs with my stomach in excruciating pain.

“I was on the physio table and Tony Ayoub and Nathan Brown came over.

“They said ‘do you want to play?’ I said I want to play, but I am really injured in tears on the physio table. And they were just like: ‘nah you’re being weak, you don’t want to play’.”

Trainer Tony Ayoub during his time at the BulldogsSource:News Limited

A few weeks later the Knights headed up to Townsville to play the Cowboys.

Kalyn Ponga made a break, but Ross realised he couldn’t keep pace due to the searing pain.

“I went to put the foot down to chase and support and I tried to run as fast as I can and both my legs are hurting and barely moving,” he added.

“Mitch Barnett flies past me and leaves me in his dust.

“The hardest thing was the coach knew I was injured and then in a video session [highlights] Barney running past me and tried to put me on show in front of the whole team.

“That’s pretty hard to deal with when a leader of the club is trying to make people less than what they are.

“I saw a specialist in Sydney about my pelvis, he couldn’t believe the degeneration it had got to.

Nathan Ross is tackled against CronullaSource:AAP

“I had both my groins operated on, I had two hernias repaired. I had mesh, now wrapped around my pelvis like crimsafe to hold it all stable.

“I can understand him wanting to have all his players on the field, he might have been getting information from Tony Ayoub that my injuries weren’t as bad as they were.

“Tony told me a few times I was being soft. Which then [with Brown] as a head coach you would be upset about, that could play a part in it. It led to a decay in the relationship between him and I.

“I found out Nathan and Tony were talking to players behind my back saying I was putting it on. It wasn’t until my surgery was confirmed, that some players come and said: ‘we’re sorry, this is some of the stuff that’s been said about you’.”

You can listen to the entire Nathan Ross interview with the Newcastle Heraldhere.

Originally published asNRL star: I was shamed by coach