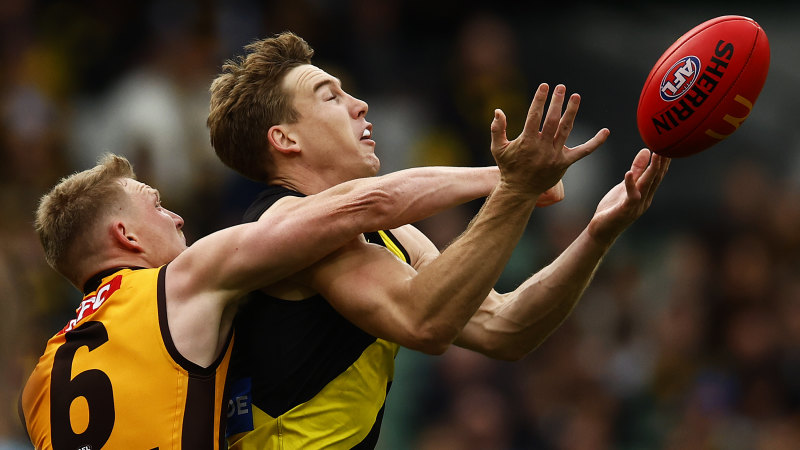 Sam Mitchell departed the MCG on Saturday night the beaten coach, but the Hawk appreciated the quality of at least one contest in the lost battle against Richmond.

In an entertaining clash claimed by the Tigers by 23 points, Coleman Medal leader Tom Lynch and James Sicily squared up in an intriguing individual bout.

The one-on-one tussle bore characteristics of the clashes footy fans once loved, as Mitchell noted after Richmond was able to halt a late surge from Hawthorn.

It pitted a hulking forward at the peak of his form against a defender playing with great flair and dare, manning each other from the goal square of the MCG on a Saturday afternoon.

“It was a really good match-up, and I am sure the fans appreciated it because they are two brilliant players, aren’t they?,” Mitchell said. 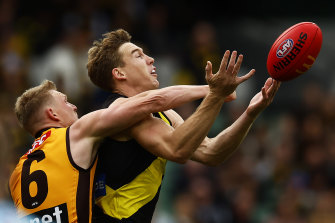 While the Tigers took the points on Saturday to shore up their spot in the eight, the victor of the old-school struggle between the full-back and full-forward was harder to assess.

Lynch was outstanding early and booted four goals from 16 disposals, though his tally would have been higher had he kicked more accurately and played more selfishly.

The 29-year-old has kicked 17 goals over the past three weeks, which is his most potent streak since his opening to the 2016 season when he was captaining the Gold Coast.

The dual-premiership Tiger has 31 goals for the season at a career-high average of 3.4 per match and flourished alongside Jack Riewoldt and Dustin Martin in attack on Saturday.

But Sicily was also superb when gathering 24 disposals, all but one of them kicks, and defended with vigour while providing plenty of drive from the backline.

Ultimately, each coach favoured their own star in judgements perhaps tainted by the colours their champion was wearing. 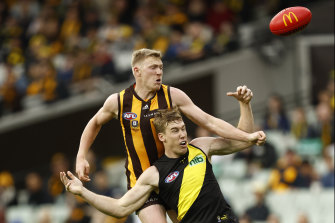 “At the end of the day, if you had said to me that Tom kicks four goals, I think I would take that most days, but in fairness, Sicily is a really, really good player as well,” Hardwick said.

The Richmond coach doubts Lynch has anything to worry about for his involvement in a clash with Jarman Impey that forced the Hawk from the field under the blood rule.

The Tigers have now won three matches in a row for the first time since the tail-end of their 2020 premiership success to allay fears they might be on the slide.

The return of Martin and Nick Vlastuin, among others, has been a factor in Richmond’s return to form, but so too has the rediscovery of their ferocity at the contest.

Tigers such as Shai Bolton hunted their Hawthorn rivals on Saturday, with Richmond laying 75 tackles to 54.

Co-captain Toby Nankervis was as desperate on the ground when laying five tackles as he was in the ruck when winning 36 hitouts.

Hardwick praised the leadership of Nankervis and Dylan Grimes, who have assumed the captaincy from three-time premiership skipper Trent Cotchin this season.

“We have come from a great leader in Trent, but these two guys are making the club their own (with) the way they lead by their diligence on field and their application off field is first class,” he said.

Hawthorn forward Jack Gunston is doubtful for a clash against the Lions in Launceston next Sunday after he was substituted in the second term with an ankle injury.

Tiger Noah Balta also faces a test to be fit against Essendon in next Saturday night’s Dreamtime at the ’G after injuring a hamstring in the third term.