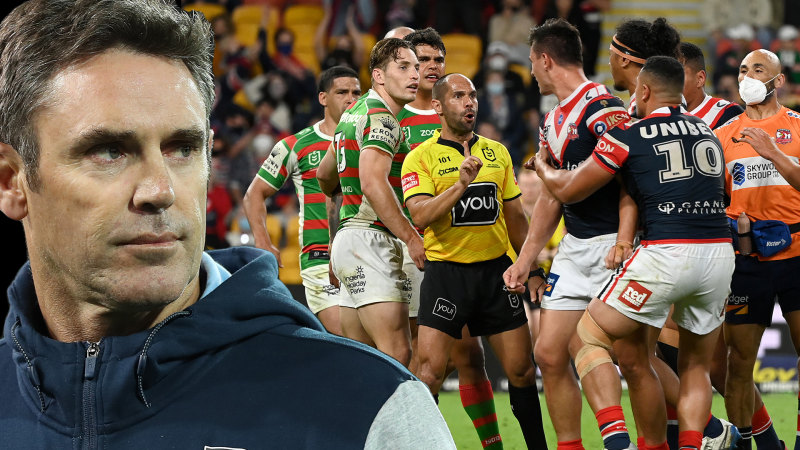 With the Maroons plunged into chaos as they choose their third coach in three years, Blues coach Brad Fittler isn’t concerned in the slightest that he could be coaching a divided team next year.

As we have made inquiries about the Maroons situation, Queensland Origin figures have been telling NSW to look closely in the Blues backyard instead of peering over the state border to catch a glimpse of the coaching car crash happening in Brisbane.

They are attempting to fuel a fire along the lines of the Roosters and Souths players not being able to come together for NSW because of the Latrell Mitchell tackle on Joey Manu. Mitchell handled the situation in the best way he could, by saying sorry to Manu privately.

Admittedly, the incident sparked strong reaction from the Roosters. Blues and Roosters skipper James Tedesco was strong with his comment: “Whether it’s accidental or not, it causes someone to break a fair amount of bones in his face … you just can’t do that.”

The Blues have strong representation from both teams. Angus Crichton is another Rooster Blue, while Souths have Mitchell, Damien Cook and Cam Murray. Others such as Luke Keary, Victor Radley, Daniel Tupou, Cody Walker, Keaon Koloamatangi and Campbell Graham are in the Origin mix.

“I don’t think it is an issue,” a calm Fittler said. “It is not something I feel I need to address with the players as a whole or individuals. 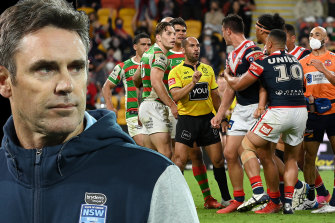 Brad Fittler isn’t concerned by any animosity between Souths and Rabbitohs players in the Blues side.Credit:Getty, NRL Photos

“Joey Manu was fine with Latrell’s apology and that’s the person who matters. There was plenty of people wanting to fire things up, but they are not the people I have to worry about. I think by the time the players come together it will be well in the past.

“I think the players are past all of that. It won’t impact the Blues.”

Fittler is watching the Queensland situation with interest, especially given his Channel Nine colleague Billy Slater is favourite to coach them and become his arch rival.

“I haven’t worked with Billy much this year,” he said. “That’s because of COVID; we’ve been in different states. I talked to him about coaching last year and my belief is that the best can learn on the run.”

As for a dream team of some of Queensland’s greats coming up against him, Fittler said: “That’s a tribute to the Blues players and what they have done.”

The longer the Wests Tigers season review drags on, the more names that are dragged into the team’s head coaching mix.

One of those is Cameron Ciraldo, who has the coaching world at his feet – he just needs to decide if the Wests Tigers are a sensible first step into head coaching.

But rather than chase a job that may not even become available, he is focused purely on the Panthers’ push to a title.

So if the Tigers are in a hurry to replace Michael Maguire, Ciraldo may not be their man. Ciraldo is represented by manager Daryl Mather and would consult with his current boss Ivan Cleary before any move. But he will ultimately be guided by a man whose opinion he rates above all others: Phil Gould.

One of Gould’s close mates is former top agent Wayne Beavis, who is doing some talking of his own. Beavis is no longer a registered player agent, but that has not stopped him having in-depth conversations with Wests Tigers chairman Lee Hagipantelis about what Shane Flanagan could bring to the club.

He is making it known to the Tigers that the Sharks premiership-winning coach and rebuild specialist is ready to go if they sack Michael Maguire. But Flanagan won’t be drawn on the actions of Beavis.

While the names swirl, Maguire is in Brisbane ignoring the speculation about his future.
He is smart enough to know there is a strong push against him. He is not exactly sure where it is coming from. If he had read the damning comments from Hagipantelis in recent days, it would be clear to him.

The problem the Tigers have is that the board re-signed Maguire at the start of this year, and to move him on it will need to cough up a year’s salary – $700,000.

They would then need to fork out big money to sign their next coach. It would be a major admission from the board that it got it wrong, and the chairman and chief executive Justin Pascoe would be in the firing line.

Something that gets lost in the tearing down of Maguire is the position he has the team in with $1.5 million to spend on players.

Yes, he has struggled to get results and to sign a superstar, but he has put the club in a place where it can afford to shop for players.

A new coach would need to win over a fractured playing group. But they won’t have to put up with a film crew documenting their movements, as Maguire did this year with the Fox Sports series Tales from Tiger Town.

Maguire was far from happy that the club agreed to open its doors and confided in people that a big-time club would not have agreed to it. 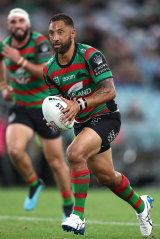 Benji Marshall has been a great signing for Souths.Credit:Getty Images

It’s hard to pinpoint exactly what is wrong with the Wests Tigers culture, but the closest thing to an explanation can be found when you cast your eye to neighbouring club South Sydney and look at Benji Marshall. He’s arguably the greatest Tiger of the modern era.

As great as it is that Wayne Bennett offered him a lifeline, even Souths insiders concede it’s wrong he is finishing up at their club. Taking a risk on Benji for a small wage would have ensured a club legend was farewelled in a respectable way. But he was told he wasn’t wanted. That’s when Maguire’s troubles started.

Souths have left some Benji money aside in case he wants to play again next year. They have grown to love him and he has been great value on the field. Off it, he has been imparting his knowledge to the young halves. He has even helped out some of the old heads.

As the NRL season enters its final stages, powerbrokers have taken stock and estimate COVID-19 has cost the game $55 million in 2021.

That’s the cost of relocation, lost revenues from crowds and everything else in between.

It’s something the game couldn’t have survived a few years ago under the reign of Todd Greenberg, when costs at the NRL, as well as staff numbers, were far higher than they are today.

ARL Commission chairman Peter V’landys has made some errors by allowing his rules advisors to change the game, but he is still the COVID king.

“The commission’s decision to go to Queensland early in the NSW Delta outbreak has turned out to be crucial,” V’landys said.

“I can remember people telling me at the time we over-reacted. I always knew that it was the right decision, because our research and data highlighted how contagious the Delta strain was. 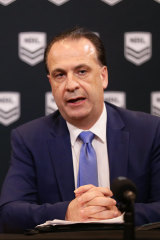 Peter V’landys is still the COVID king of sport.Credit:Getty

“However, all credit must go to Andrew Abdo and his team.

“The hard work that goes on behind the scenes is extraordinary. Their commitment kept the competition alive.”

Sims ‘didn’t ask for a cent’ from Dragons before exit

The Dragons cut short negotiations with Tariq Sims before he could even get serious about money or the length of any future deal with the club.

A number of mistruths have been circulated about the ins and outs of Sims’ upcoming exit from the Dragons.

There is also a story to be told about any potential signing of Viliame Kikau as a replacement.

The first issue to set straight is that Sims had made demands of the Dragons when it came to his future at the club. I put this to Sims, who doesn’t have an agent. He is doing his deal with the help of his wife, Ash.

“The conversations with the Dragons I had didn’t even reach that point in negotiating length of deals or, you know, the financial situations. The conversations we had were pretty short and sharp. I didn’t ask for a cent. I was told after the second conversation that if I could find another deal I was free to do that. And that’s pretty devastating because I thought I was going to retire at the club.”

Sims isn’t an ego out of control — he knows his next deal won’t be as rich as his current one. He wants to make a difference at the club where he plays.

He was one of the few players who didn’t attend the Paul Vaughan barbecue. I tried to get him to respond to this but he avoided speaking directly about the event that destroyed the Dragons season.

As for Kikau, the Dragons have said previously they had no interest in him. But here is the truth.

Dragons coach Anthony Griffin gave Kikau his debut at the Panthers but didn’t have a huge opinion of him then. He had to be talked into playing Kikau and the second-rower is well aware of that.