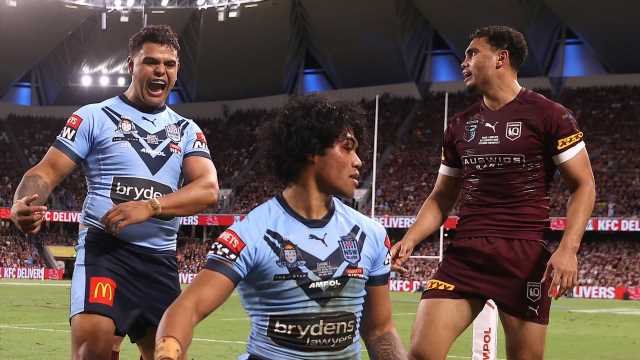 When new Queensland coach Paul Green said “they’re a better team than us”, who knew how right he would be?

With Queensland getting a bonus home game with the MCG match moved to Townsville, it was always supposed to be close.

No one expected one of the biggest Origin drubbings in history.

In front of the biggest crowd at Townsville’s new Queensland Country Bank Stadium that was largely Maroons dominated, NSW has turned in its biggest ever victory in Origin history.

In front of a sell out crowd bringing the noise at the brand spanking new stadium, Queensland were humiliated as Tom Trbojevic claimed a hat-trick, and Latrell Mitchell and Brian To’o scored doubles.

While the Blues claimed their biggest ever win, the most important number is 1-0, with NSW ahead but still a win away from winning back the Origin shield.

After 13 series defeats in 15 season, the Blues will know all about it, while Queensland will no doubt use the sting of the trashing to come back stronger — they always do.

“That hurts a fair bit, mate,” Queensland coach Daly Cherry-Evans said. “Just missed it, missed the jump. Had a good chat at half time then came back out and didn’t learn from our mistakes so we’ve got lot of improvement left in us and the Blues were good tonight.

“We knew we had a great side we’ve got the best players in the game,” he added. “We knew if we worked together as to team we’d put in a good performance but 50 points is really pleasing.”

Townsville just paid $8 million for Tommy Turbo to put on a hell of a show. Hope they enjoyed it. #stateoforigin#uptheblues

This score line is becoming outrageous. The Townsville ‘tent city’ might burn tonight because of this. #StateOfOrigin#SOO

Origin isn’t for everyone, back to reserve grade…. #NRL  #origin2021

THAT is a win. Pumped for NSW. All the debutants were outstanding #Origin

Who’s dumb idea was it to play origin in Townsville?! #QLDER

The Maroons have two weeks to turn it around.Source:Getty Images

“I thought Queensland played a club style of footy rather than an Origin style of footy tonight,” Michael Ennis said. “I felt like NSW really adjusted their aggression into an Origin style of performance but I also felt that they got the important stuff right tonight. That's running hard, winning that battle through the middle, kicking long. They were patient but they didn’t have to be patient for long because Queensland fell apart.”

Townsville puts on an Origin show

One Blue in a sea of Maroon.Source:News Corp Australia

Despite the final result that blew the Maroons out of the water, the Townsville crowd turned in an amazing atmosphere.

While they were silenced as NSW piled on eighth tries to one, social media had to hand it to the first regional centre to host an Origin match.

Packed with Maroons fans with a smattering of Blues supporters, it was an incredible atmosphere, as much as it won’t be remembered as a great Origin match.

Best atmosphere I've felt for an Origin in a long time. Townsville has gone from a ghost town to pumping. Unreal. #Origin

This is a better origin Stadium than anything sydney has dished up in 40 years. We should replace theirs with one in Townsville every year. #stateoforigin

Origin should not be played in other states. And in years Queensland hosts two, one must always be in Townsville. This is amazing. #stateoforigin

You don’t see this too often in Australia at all.

This is the best night in Townsville’s history #Origin