Melbourne are “quietly confident” that key defender Steven May will be able to play in the grand final after he suffered what coach Simon Goodwin said was suspected back-related hamstring tightness.

Goodwin said May, who left the field in the first quarter and then came back in the second before being subbed off in the third term, would be assessed in the coming days and that the extra week’s break before the Perth grand final would not hurt his chances of being available for the club’s first grand final in 21 years.

“Steve’s just got a bit of a tight hamstring. Clearly he came back on the ground for a period of time. We think it might be back-related,” Goodwin said after the Demons demolished a limp Geelong by 83 points.

Goodwin said they had brought May back on the field, since they felt he was OK and the game wasn’t yet decided.

“The game was still in the balance. He’s an important player to us. He felt like it was OK, they felt like it was back-related so at that stage of the game it was worth taking the risk. He got a little bit tighter as the game went on so we didn’t want to take the risk and we obviously subbed him out of the game.”

The Melbourne coach added that the fortnight before the grand final “certainly won’t hurt, that’s for sure.

“They give him a chance to really rest and recover over the next three or four days, as will our whole group, we’ll do a very similar program to what we had heading into this game and take three or four days away from the game and reset ourselves … That’ll help Steven, there’s no doubt about that. He’s a full pro now, he’ll look after his body, give himself every chance.”

Goodwin described the performance of skipper Max Gawn, who booted four of his five goals in an astonishing third quarter (and finished 19 possessions and 33 hitouts), as “incredible”.

“He typified tonight why he’s the skipper of the footy team. He played his heart out, it wasn’t just his impact on the scoreboard, I thought his ruckwork was strong, but the thing that stood out to me was the chase-down tackle on Gary Rohan in the third quarter. I think that’s the way we want to be seen as a footy club, as a team that never gives up. 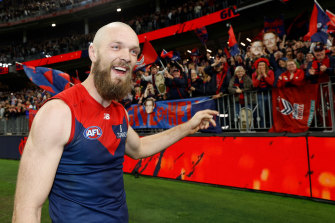 “He was incredible. You know, he impacted the game a lot of ways and he’s a big character and a big figure in our footy club.”

Goodwin had heartfelt words for Melbourne’s exiled supporters, who would not see the team in the grand final.

“It’s hard to put it into words what this means to our supporter group. The amount of messages and support and emails that’s coming through is unbelievable, and we hear about what’s taking place back in Melbourne and the support and our supporters are embracing the situation that we’re in, but ultimate[ly] we’d love them to be here, we’d love to be doing it in front of our home people.

The coach said the 83 point result – Geelong’s biggest finals loss under Chris Scott – “reaffirms our belief” in the way they played and showed their offensive potency.

“Clearly, we base our game around our contest and our ability to defend. But I think you saw tonight that there’s a potency in the way we attack.

Veteran and ex-skipper Nathan Jones, whose wife is expecting twins, was close to selection according to Goodwin, but the decision on whether he would stay in Perth or return home to be with his family was not settled. 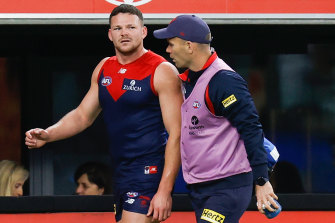 Steven May has a back-related hamstring injury.Credit:Getty Images

“He’s in a really tough situation – you know, Jerri’s due with twins and obviously could come at any stage. We’ll continue to liaise with Nathan and Jerri about what that looks like, you know but he’s close to selection, he is pushing his case. He certainly wants to be part of it.”

Goodwin said his team had dealt well with pressure and expectation.

“Our pressure comes from not winning a premiership for 57 years but it’s something we’ve spoken about, you know, how we deal with pressure and how we deal with expectation for the last two years. And we’ve prepared our players to do that. So nothing will change in that space. ”