The Parramatta Eels have told Blake Ferguson he will not be at the club beyond the end of next season, opting against extending the contract of the former NSW winger.

The Herald can reveal the Eels informed Ferguson's management a fortnight ago that there won't be a spot for him at the club after the 2021 season. Ferguson, who joined the club from the Sydney Roosters in 2019 on a three-year $1.5 million deal, still has another year to run on his contract. 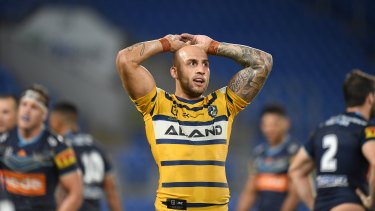 Blake Ferguson has been told 2021 will be his final season at the club.Credit:NRL Photos

The Eels aren't actively forcing Ferguson out of the club, but nor would they stand in his way should he land an extended deal at a rival club.

The Eels have had internal discussions about Penrith winger Josh Mansour, who is also aware of Parramatta's interest, however the club is not in a position to take the next step unless Ferguson was willing to move on.

Both Mansour and Ferguson are managed by Sam Ayoub, who recently claimed there had been no discussions around Ferguson's future at the club. The manager appears to have left out some of the details surrounding Ferguson's situation in a recent article in The Daily Telegraph.

"That has never been a discussion. I am his manager, no one has pushed it to me," Ayoub told the Telegraph about the possibility of Ferguson moving on earlier in the week.

"As for Parramatta having interest in Josh Mansour, that has never been a discussion. I met with them a week and a half ago about a raft of issues at Parramatta. Not once was there a discussion around pushing Blake.

Ferguson had a sensational first season at the Eels but struggled to find the try line in 2020, and as a result lost his spot in the NSW State of Origin team.

Ferguson still has plenty to offer, however the Eels have given him plenty of notice to find another club for 2022. If Ferguson wants to move on immediately, the Eels won't stand in his way and could trigger a flurry of movement before the Christmas break. In other player transfer news:

November 18, 2020 Rugby League Comments Off on Eels inform Ferguson he won’t be at the club beyond 2021
NFL News