Prized West Coast recruit Tim Kelly will convert his shed into a temporary gym as he attempts to maintain his elite levels of fitness and strength during the coronavirus pandemic.

With all AFL games cancelled until at least May 31, players from around the league have been sent home indefinitely. 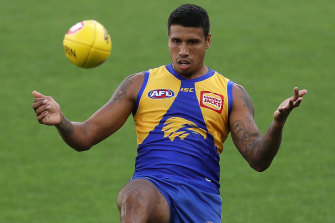 New Eagle Tim Kelly is turning his shed into a gym to keep up his fitness regime.Credit:Getty Images

"I'm pretty fortunate I've got a pretty big block, so no doubt I'm going to be running, there is going to be a lot of hill runs and I'm going to have a little gym set up in the shed," Kelly told the club's website.

"I'm definitely going to be trying to maintain all my fitness that I've gained over the pre-season and put my best foot forward [so] that I'm coming back in the same shape, if not better."

Kelly made a relatively quiet Eagles debut by his standards, tallying 19 disposals, two clearances and a goal in the 27-point win over Melbourne last Sunday.

Kelly said it will take time to adjust to his new teammates.

"It's a challenge to build that chemistry, understand the game plan and all the rest of it," he said.

"Pretty fortunate here, a lot of the way that we think and set up it's structure first and then play on instinct and that's what I do best.

"These things are going to develop over time and I definitely felt a lot more comfortable than I did in the previous Marsh [pre-season] games and it just felt weird not having a crowd there."