Russell Crowe made a timely return to Redfern this morning alongside Souths legend Greg Inglis as the Rabbitohs prepare for a second clash with the Roosters in as many weeks.

Souths co-owner Crowe was pictured with Inglis – who remains on staff at the Rabbitohs – before shaking hands with Rabbitohs coach Wayne Bennett and the eldest Burgess brother, Luke. 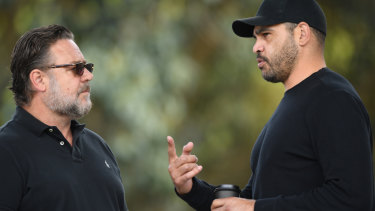 Crowe then read a verse from the famous Book of Feuds to players, according to returning Burgess brother Tom.

"Big Rusty came in here to pump up the boys," Burgess said. "The passion he has for the club is unreal. I've been exposed ever since I moved here, and even before that. You put 10 cents in him and he'll talk about Souths all day."

The Book of Feuds details the quarrels and controversies behind the Rabbitohs' bitter rivalry with the Roosters and there is no club Crowe wants his team to beat more than their opponents on Friday night.

"It goes back a while, he's been a Souths fan for years," Burgess said. "It goes back into the 70s and 60s when they were big rivals back then. You can ask any Rabbitohs fan and they hate the Roosters."