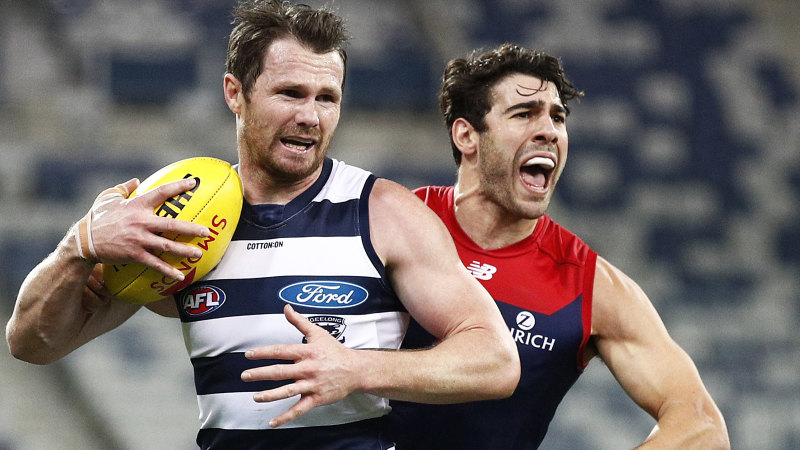 The team with the presence of mind to execute the game’s skills under the heat of a preliminary final spotlight will come out on top in Friday night’s clash between Geelong and Melbourne, according to star Cats midfielder Patrick Dangerfield. 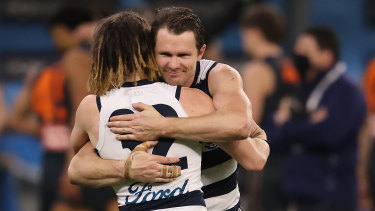 Patrick Dangerfield and Gryan Miers celebrate the Cats’ win over the Giants at Optus Stadium.Credit:Getty Images

He was below par in the qualifying final as he battled a finger fracture but bounced back to form with a solid last quarter in the semi-final as he strives to lead Geelong to their second consecutive grand final berth.

Although he shapes as a key determinant in the result, Dangerfield said every player carries the same weight of expectation when playing in big games.

“Every player should have the view that their performance is critical to the team’s success,” Dangerfield said.

“I don’t think you can hide and just play your role.

“We are all important within the way we function as a team, so you have to do your best within that system, and I am the same in that I have high expectations in how I want to perform, but the challenge in these circumstances and environments is to keep that clear thinking even when the arousal levels are high.”

“We were far more efficient going forward, and we were a lot more difficult to play against than we were against Port Adelaide,” he said.

Dangerfield played down the relevance of Geelong’s experience in finals when compared to that of the Demons, who have played just four finals in the past decade.

“I’m not really reading too much around the level of experience, I more draw on the immediate performance and theirs has been pretty good, so the challenge is ahead of us,” he said.

“Nerves are a good thing as long as they don’t control all of your behaviours and that is the challenge we have as players.”

The Cats lost Brandan Parfitt to a hamstring injury and are also without All-Australian defender Tom Stewart and shut down midfielder Mark O’Connor for the important clash.

But Dangerfield said there was no point dwelling on who was out of the team.

“When we’ve had players unavailable due to injury, the strength of ours is spreading our load across the whole group,” he said.