A report containing “harrowing allegations” about the treatment of Indigenous players at Hawthorn Football Club during their recent premiership era recommends the players be compensated if the allegations are found to be true, but legendary AFL coach Alastair Clarkson, who is at the centre of the crisis, vigorously defended himself against any claims of wrongdoing.

The league on Wednesday was engulfed by a racism scandal that has implications across the competition. AFL boss Gillon McLachlan said that “on face value it is hard to find more serious allegations”.

Clarkson, who coached the Hawks to four premierships including a historic treble between 2013 and 2015, agreed to push back his start date as the new coach of North Melbourne but said he refuted “any allegation of wrongdoing or misconduct,” while his former Hawthorn football lieutenant Chris Fagan took leave as head coach of the Brisbane Lions.

AFL commissioner Andrew Newbold, who was president of Hawthorn between 2012 and 2016, also took a leave of absence after the league set up an independent panel headed by a King’s Counsel to investigate the claims. Newbold is not alleged to have been directly involved in the allegations and the AFL said he was taking leave to assist in the investigation.

Among the allegations in an external Hawthorn review, and published by the ABC, are that Indigenous former players were told to live separately from their families and that one player and his partner were allegedly pressured to terminate a pregnancy.

Clarkson, Fagan and Newbold were not approached by the authors of the review, which was commissioned after allegations made by former premiership star Cyril Rioli and his partner Shannyn in The Age. 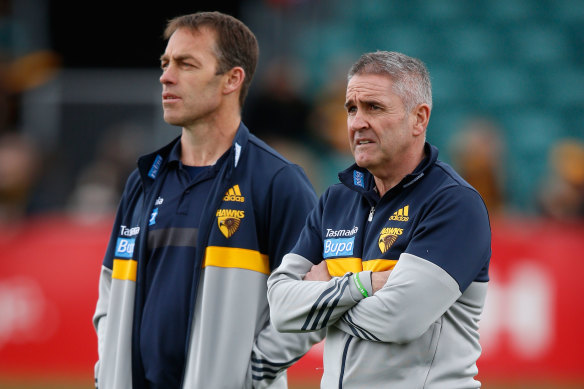 Its author, former Richmond player Phil Egan, commended the bravery of First Nations players who shared their experiences and described the review’s contents as “unprecedented”.

“The report noted a range of recommendations for the club to address in relation to creating a culturally safe environment for all,” Egan told The Age.

“These include further and immediate investigation of the findings; reparation and compensation for the affected families if the allegations are validated; and policy and structural changes to ensure cultural safety is embedded within the club.”

Egan, an Indigenous man who played 125 games for the Tigers during the 1980s and endured his own experiences with racism in the game, said he felt privileged to have been tasked with the review because of its sensitive nature, and that Hawthorn deserved credit for commissioning it.

“It was a very difficult body of work to get through, but I took it as a cultural responsibility – as an Aboriginal man and a past player that knows club land,” he said.

“The players, to have built up the strength to come forward to make sure this never happens to anybody else, they are to be commended.”

Clarkson, who last month signed a lucrative five-year deal to coach the Kangaroos and was due to start the job on November 1, released a strongly worded statement saying he had not been afforded “due process”.

Sources familiar with the situation said Clarkson was first made aware of the allegations on Monday.

“The health, care and welfare of our players, staff and their families were always my highest priorities during my time at Hawthorn Football Club,” he said.

“I was therefore shocked by the extremely serious allegations reported in the media earlier today. I was not interviewed by the authors of the report commissioned by the club, and nor have I been provided with a copy of the report,” Clarkson said.

“I was not afforded any due process and I refute any allegation of wrongdoing or misconduct and look forward to the opportunity to be heard as part of the AFL external investigation.”

The Brisbane Lions said in a statement that Fagan would “work with the AFL on an investigation into allegations concerning historical events at the Hawthorn Football Club, where he was a former employee”.

“Chris supports and welcomes the investigation,” the statement said.

“He was not consulted during the Hawthorn sponsored review and looks forward to the opportunity to be heard as part of the AFL investigation.”

Hawthorn sources said four players’ testimony was central to the review, with three women, all current or ex-partners, contributing.

A player known as “Ian” told the ABC he was excited to share with his teammates that his partner was 12 weeks pregnant with their child.

He alleged in the ABC story he was ushered into an office by Clarkson and Fagan, where he was urged to have the pregnancy terminated and to “get rid” of his partner.

“It was so intimidating, confusing and upsetting,” he told the ABC.

Another player told the broadcaster he felt “under a microscope” and was told his partner was holding him back and he needed to end the relationship to go further in his career.

Coaches were also accused of coercing players to remove SIM cards to cut them off from their family members to force them to focus on football, according to the ABC.

The player who alleged he was urged to have his partner’s pregnancy terminated told the ABC he was encouraged to move in with a coach: “I was then manipulated and convinced to remove my SIM card from my phone, so there was no further contact between my family and me. They told me I’d be living with one of the other coaches from that night onwards,” he is quoted as saying.

The ABC report says that the player felt he had no choice. “He told me to kill my unborn kid,” he is quoted as saying.

The player reportedly phoned his partner in a state of shock. “I just remember that he could barely get the words out and he seemed to be crying, and he quickly said that we needed to terminate the pregnancy and end the relationship,” the player’s partner reportedly said.

“Just like that. I will never forget that phone call or the heartbreak I felt in that moment. I was frozen on the spot, completely numb from what I had just heard [the player] say. I had no idea what was happening.”

The Age can reveal that the timeline of events in the report was from 2010-16, according to sources familiar with the situation.

Hawthorn sources said the club did not speak directly to the former players, who told their stories to Egan, but the club offered to meet those concerned if they wished. However, the players did not feel comfortable speaking to Hawthorn.

The AFL has been given a redacted, de-identified report that does not name the players, nor the officials.

Hawthorn chief executive Justin Reeves said the claims were a surprise to many.

“We’ve spoken to a really wide range of people who were at the club at that time, and it’s been a surprise to everyone that I’ve spoken to,” Reeves said.

“This report came back with some disturbing allegations and we acted on [them] straight away.”

Asked whether Hawthorn had a cultural problem, he said: “I think Australia has a culture problem, historically”.

Victorian Labor senator Jana Stewart said she was heartbroken by the allegations.

“I bloody love footy, and this just breaks my heart,” she said.