Next Friday marks the third women's State of Origin in history. It's elite, fast, exciting and, most importantly, the most-watched women's sporting event ever since its inaugural year in 2018.

Behind the excitement this year, though, came a surprising twist for the Blues camp with halves duo Kirra Dibb and Maddie Studdon dropped by Blues coach Andy Patmore. 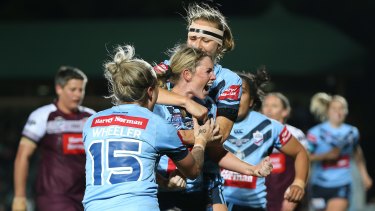 Maddie Studdon has been dropped from the Blues side despite being named player of the match in Origin last year.Credit:NRL Photos

But right now, an expansion of the NRLW, with more rounds, more clubs on board and more time on-field would create the marquee competition we need.

It would provide a platform for the best talent in our game to develop and prove themselves in the eyes of selectors.

In short, our female players would have more time to show off their best.

In the men's game, if you're not performing in first grade you're dropped back into reserves. If you are, you are lifted up.

This is a great relationship that could be developed between the Premiership in NSW, the Holcim Cup in Queensland and the NRLW so players could have more opportunity to impress.

If that is done, players can grow. Teams can grow. The supporter base and eyeballs on the game will grow.

Our competitiveness internationally, which sees 80 minutes of game time compared to 60 minutes in an NRLW game, will go to a new level.

Earlier in the week, Blues skipper Kezie Apps described the dropping of Dibb and Studdon as an example of the talent coming through the women's game.

Imagine what we would see if there was simply more of it.

November 6, 2020 Rugby League Comments Off on Chicken before the egg: NRLW expansion needs to come before more State of Origin
NFL News