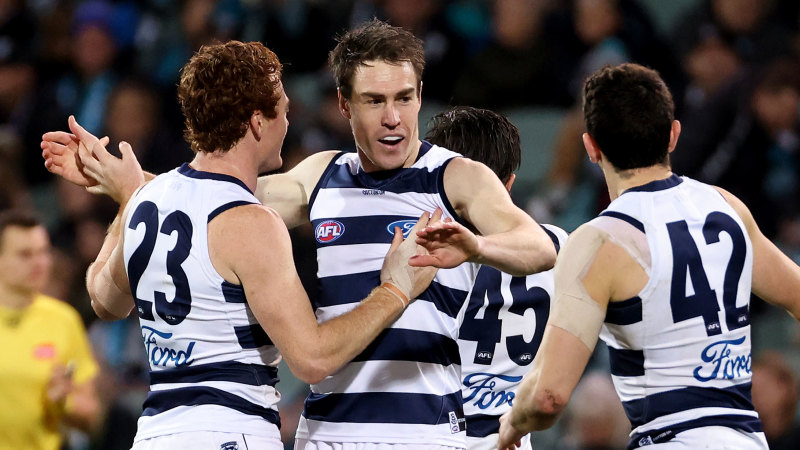 The Cats had to absorb a first-quarter Connor Rozee whirlwind, a 21-point second-term deficit and a Power surge to start the fourth term to notch their fifth successive victory. 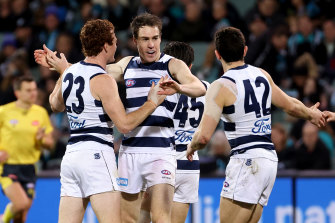 Jeremy Cameron had a huge final quarter for the Cats.Credit:Getty Images

Prized off-season recruit Jeremy Cameron showed why he could be the missing puzzle piece to take Geelong to the top of the mountain, bagging five goals, ably supported in attack by Tom Hawkins (four) and Gary Rohan (three).

The Cats’ forward targets were on song in the initial stages and absolutely unstoppable late.

Cameron blazed a bomb from long range early and Hawkins slotted back-to-back set shots as the Cats moved ahead by 14 points entering time-on in the opening stanza.

Port responded spectacularly with a burst of four goals in barely three minutes of playing time – three of them pocketed by the red-hot Rozee – to steal the lead from out of nowhere. 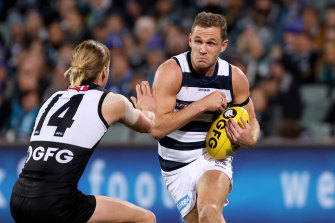 The Power maintained their expansive, uptempo pace as the second period unfolded and the contest remained on their terms with Rozee extending his purple patch.

Having made mince-meat of the seasoned Zac Tuohy en route to nailing four first-quarter goals, livewire Rozee looked set to have his way with his new opponent, Jed Bews, in the second.

His audacious over-the-head handball in attack landed in the lap of Kane Farrell who sailed through a physics-defying left-foot banana to bring the house down.

They stuck with what has served them so well for much of 2021, dominating defensively in the air and working their way forward with a keep-away, kick-mark strategy to patiently eat into Port’s lead.

Cameron outmarked Aliir Aliir and converted following a Power turnover, Hawkins goaled after taking advantage of a mismatch against Lachie Jones, Lachie Henderson drilled a set shot and Brendan Parfitt got on the end of an unbroken coast-to-coast chain, Geelong suddenly up by three points at half-time. 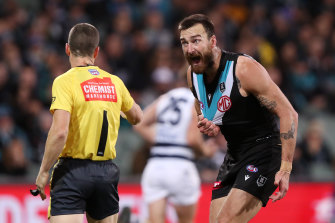 Charlie Dixon pleads his case to the umpire.Credit:Getty Images

A couple of simple misses from Rohan and Esava Ratugolea either side of Ollie Wines’ team-lifting major gave Port a sniff.

But the dynamic Rohan made amends, conjuring a marvellous snap after turning Dan Houston inside-out, then outmarking Port captain Tom Jonas one-and-one and goaling on the cusp of the three-quarter-time siren.

Charlie Dixon goaled back-to-back to start the fourth, taking his tally to four, and Rozee slotted his fifth, to equal his career-best to give Port the lead back.

The Cats then replied with three majors in less than three breathtaking minutes, Cameron slotting two of them and setting up the other for Isaac Smith, before jagging his fifth to keep the hosts at bay. 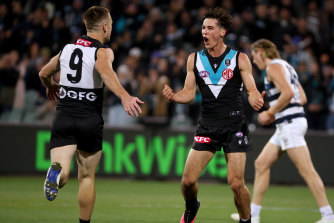 Connor Rozee was electric early for the Power.Credit:Getty Images

RESURGENT ROZEE
Port coach Ken Hinkley rushed to Rozee’s defence last month amid speculation the richly talented but out-of-sorts forward might be relegated to the SANFL.

With his last six-pointer coming more than a month ago in the Showdown, Rozee was well overdue to repay Hinkley’s faith.

He did so emphatically.

His drought-breaker came in fortune fashion after taking the free kick for the fallen Marshall, but his next three for the term were sizzling, repeatedly quelling Zac Tuohy and giving Port the early edge. 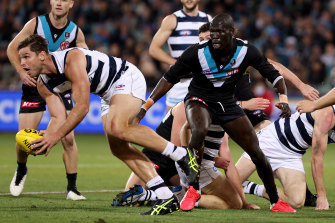 TOM BACK ON TARGET
Hawkins looked like a man on a mission, seeking to avenge his most recent appearance against Port on Adelaide Oval, which ended in a 16-point qualifying final defeat and a wayward 0.5 return for himself.

Hawkins again had Trent McKenzie line up on him but this time the reigning Coleman Medallist, despite a few blemishes, largely corrected his radar.

His potent partnership with Cameron gives the Cats arguably the best 1-2 punch in the competition, one that the Power had no answer for.