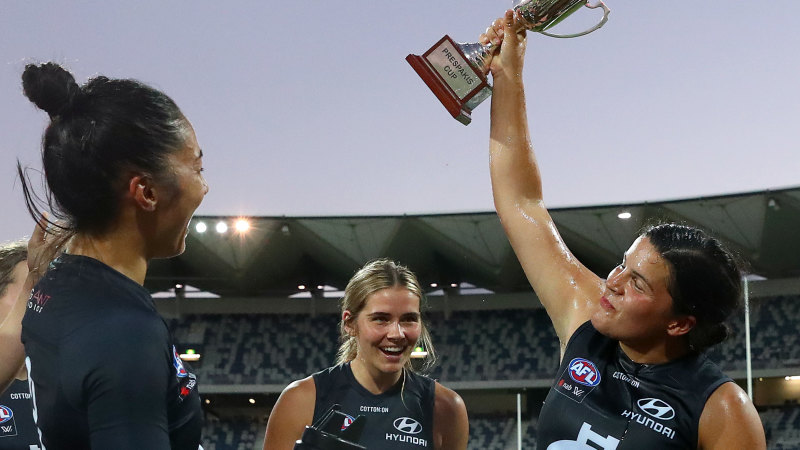 Carlton have taken out the ‘Prespakis Cup’ in a hard-fought contest, kick-starting their season with a 14-point win in a match that was rescheduled on Thursday when the Western Bulldogs and Brisbane Lions were both unable to play this weekend due to COVID.

The late change meant the Prespakis sisters Maddie and Georgie, who play for Carlton and Geelong respectively, could play against each other for the first time, with Carlton’s Maddie one of the AFLW’s stars, while Geelong’s Georgie earned a rising star nomination after her round-one debut. 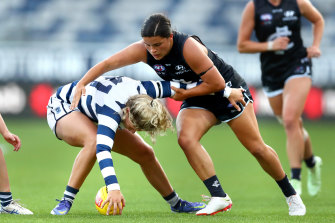 Neither took a backward step and although the more experienced and hard-running Maddie held sway with 29 disposals, Georgie showed her class in tight, winning multiple contested possessions and shapes as a future star. Georgie showed her skill in the third quarter when she opened up space to create a shot for goal that fell just short.

It was not the game’s only mini-battle, with opposing coaches Carlton’s Daniel Harford and Geelong’s Dan Lowther, long-time friends, having played in a Herald Sun Shield win while schoolmates at Parade College in 1994.

Both teams played extra numbers behind the ball on Saturday, making avenues to goal difficult to find, with the Cats finding the Blues’ defence impenetrable. Carlton captain Kerryn Harrington starred in defence, her rebound worrying Geelong who struggled to contain the Blues on the outside.

Carlton’s ability to find space opened up an opportunity for Elise O’Dea to kick the Blues’ first goal in their first inside 50 despite Geelong dominating territory.

Unfortunately, the Cats, who were without key player Nina Morrison due to COVID protocols, bombed the ball forward too often rather than holding it so numbers inside 50 could even up.

In the end it was only another piece of ill-discipline from Carlton that gave exciting Irishwoman Rachel Kearns the chance to kick her first goal when she was the beneficiary of a 50-metre penalty.

Kearns attacks the football with ferocity, but she also showed how quickly she was adapting with an accurate set shot.

Her attack on the ball has people watching and this time it was her teammate Georgie Prespakis who copped an injury when her head connected with Kearns’ hip as she tried to tackle her sister.

Despite goals being hard to find Carlton’s ability to move the ball cleanly more often than Geelong, who fought hard and marked well, was the difference with two goals coming directly from tough interceptions from O’Dea.

On the first occasion she scooped the ball into space, with the umpire overlooking the move to get the ball to the classy Nicola Stevens who converted.

The second key moment came when the Cats were pressing after drawing within seven points when Phoebe McWilliams kicked Geelong’s second goal. O’Dea body-lined the bobbing ball at half-back to find Stevens, who ran the ball inside 50 before finding Georgia Gee within range. Gee kicked the goal and the result was determined.

Geelong have improved under Lowther’s tutelage, while Carlton did what they needed to do after a disappointing 2021. 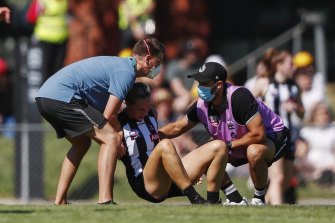 Collingwood’s AFLW premiership credentials were on full display at Victoria Park on Saturday, in a 27-point dismantling of St Kilda to keep their clean record this season intact.

But a suspected concussion to Pies’ tall Erica Fowler and a knock to the ribs to debutant Imogen Barnett in the final quarter put a sour note on a game that had well and truly been sealed by then.

Last year’s preliminary finalists, who were without forward Chloe Molloy due to health and safety protocols, outclassed the Saints, putting five unanswered goals on the board by three-quarter time to take an insurmountable 33-point lead into the final change.

Collingwood’s ball movement was the highlight. After going at 65 per cent in their round one win over Carlton, they again proved too sharp for the Saints, picking off marks in defence and then using the corridor to their advantage to again register a disposal efficiency of 65 per cent. 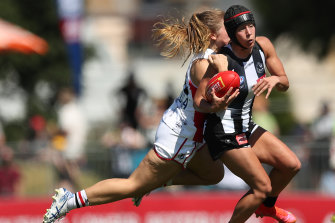 It was in the engine room where Brittany Bonnici and Jaimee Lambert controlled proceedings. Bonnici amassed 26 disposals, seven marks, 10 tackles and six clearances in a clear best afield performance, while Lambert was similarly as busy, compiling 25 touches and five clearances.

The more experienced Magpies averaged 10 more games per player compared to their counterparts, and that experience was evident in the one-sided affair, particularly across half-back as they repetitively picked off intercept marks.

The Magpies were untouchable in the opening term, preventing the Saints from entering their forward 50 for the entire quarter.

From their nine entries, the Pies slotted 3.3, led by Bonnici and Lambert’s work through the midfield.

The Saints copped a spray at the first change, and that saw them click into gear in the second term. But despite winning the inside-50s for the quarter, 5-4, they managed just one behind, as the Pies extended their lead against the momentum with a late goal.

While the Saints were a lot more competitive in the clinches after half-time, the Pies again added to their lead with the only major of the third term, and when they posted the sixth major to start the final stanza, it appeared they were en route to keeping the visitors goalless.

But the hard-fought Saints managed to snare the final two goals of the game to end the contest on a positive note.

Fowler’s suspected concussion, suffered late in the match on the wing when she was crunched in a loose-ball contest, leaves her in some doubt to face Geelong next Friday night, while Barnett walked from the field in the closing minutes pointing to her left ribs and took no further part in the game.

The Saints, whose coach Nick Dal Santo watched from home in isolation, remain winless through two rounds and face an undefeated Melbourne next weekend.
– Damien Ractliffe

Melbourne have defeated Richmond by 16 points in a hot contest at the Swinburne Centre under the Friday night lights.

Both teams keen to keep up momentum from round one wins, it was a physical contest seeing neither team leaving with anything left in the tank.

As what will likely become the norm this season, both teams each made five changes to their winning round one sides, the Demons’ all due to the AFL’s health and safety protocols, Richmond’s a combination of the COVID-19 rules and injury. Both sides were forced to dip into train on players as emergencies due to limited player availability. 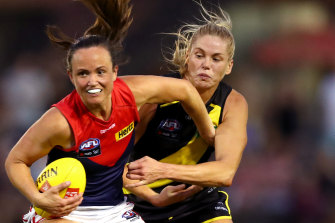 Big name recruit Tayla Harris got the Demons on the board before the siren, cutting the margin to seven points the margin at quarter time.

Melbourne turned the tables after the first break, All-Australian Demon Kate Hore tied the scores, then slotted a second to edge them ahead. 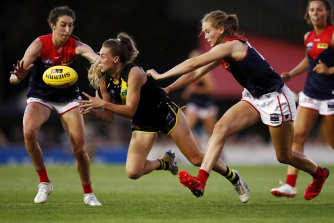 In tight in the contest.Credit:Getty Images

At that stage it was six clearances to one, Melbourne managing to protect the ball in their forward 50, seeing two goals in a row from Alyssa Bannan.

Demons skipper Daisy Pearce earnt a free kick and gave them their sixth major in a row, five time All-Australian Karen Paxman’s had a slower game last week but had notched 16 disposals and eight handballs by halftime.

Then, at the main break, the clearances were nine to three and a similar difference with inside 50’s saw the Demons ahead by 26 point.

The ladies in yellow and black saw Brennan feed Tessa Lavey her second for the night, Sarah Dargan got them back within 16-points but not before experienced Demons Pearce and Karen Paxman bit back.

A spectacular goal soaring off the boot of Mon Conti gave the Tigers a flicker of hope in the final term butDemon Harris wouldn’t have it, soccering one through.

Brennan snapped a goal with four minutes to go but they couldn’t beat the clock, Melbourne showing why they remain the premiership favourites.

HISTORY MADE AT THE SWINBURNE CENTRE

Richmond’s first game was against Melbourne at the same oval. On Saturday, May 2, 1908, Richmond ran out onto Punt Road Oval for its first league game, up against neighbouring team Melbourne. Now, more than a century later, the club’s AFLW side got their chance early in January, 2022, at what is now called the Swinburne Centre.

Debutant Tiger Meg Macdonald has had a whirlwind month after recently being elevated to the main list with Ilish Ross ruled inactive for the season. Macdonald was playing for the Casey Demons before receiving the call from Punt Road just prior to Christmas, to a delighted Macdonald family who have been one-eyed Richmond supporters all their lives.
– Sarah Burt