One of the authors of the study that identified CTE in Graham 'Polly' Farmer's brain has called for a cultural change in AFL that would see players take themselves off the ground during games to have head injuries checked, rather than maintain the "warrior culture'' that has seen them bravely stay on the field in the past.

Latrobe University's Associate Professor Alan Pearce also suggested that Australian football should consider a modified no-contact version up to the age of 12 in juniors, to reduce the impact of head trauma injuries such as concussions and sub-concussive hits. 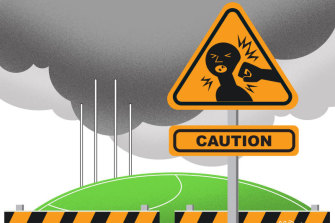 There needs to be a cultural change in the AFL in dealing with concussion, says one of the authors of the study that identified CTE in Graham ‘Polly’ Farmer’s brain.Credit:The Age

As the fallout from the first discovery of CTE in a former AFL player's brain continued on Thursday, Pearce said he did not think much could be done to change the rules to make the game safer at adult level at this stage.

"At the adult level, club level, elite level, it's getting adults to understand the risk and if they are suspecting they've copped a bit of a knock that doesn't really show up, but they don't feel quite right, what we say is 'if in doubt, sit it out,'' said Pearce, who runs the Australian Sports Brain Bank in Victoria.

Pearce said the "warrior culture" and "badge of honour'' culture that saw players remain on the field after head knocks wouldn't necessarily happen if it was an injured ankle or shoulder.

"They'd come off and get it checked out. And that's what we're suggesting with head trauma as well," he said.

Pearce called for non-contact football at junior level up to the age of 12.

"We can reduce exposure in kids. If we can do a modified version of Australian rules football till the age of 12, where we take out contact for example – and this is what they're doing in American football and also in soccer now, removing the heading – which the football association in Britain changed about two days ago, is to reduce the impact on developing children's brains. That actually reduces the exposure risks quite significantly.''

Pearce said he thought there would be further cases of CTE in AFL. "I think so. It would [be] naive for me to say we're not going to see another CTE case."

AFL Players' Association chief executive Paul Marsh said it was "inevitable" that more former players would be found with CTE however the Farmer news – while significant – was unlikely to have an immediate impact on the way the game was played.

"Today's news doesn't make this a more serious issue than it was yesterday," Marsh said.

Marsh said the presence of CTE in Farmer would not affect the attitudes of current AFL players to the game.

"The game is so much safer than what it used to be and every year this continues to evolve so I don't think this will have a huge impact on the current playing group," Marsh said.

Farmer, who died last year after having Alzheimer's at the end of his life, is the first former AFL player to be found with signs of CTE, a neurodegenerative disease likely to be caused by repeated head knocks.

The discovery of CTE in a former NFL player in America, Mike Webster, in 2002, has led to huge concussion claims being made by former players against the NFL, leading to concussion settlements in a process that remains ongoing.

Several former AFL players have indicated they are interested in being part of a class action.

"With respect to the past players, we can't do anything to change their circumstances other than support them. [As to] the class action that is a players' right to go down that path and we will see how that plays out," Marsh said.

The AFL chief executive Gill McLachlan released a statement in response to the news about Farmer outlining their work in the area.

"The AFL will continue to invest in research to better identify and manage concussion and other brain-related trauma at all levels of the game," McLachlan said.

The league's apparent sensitivity to the issue was evident in the fact the official AFL website did not report the news of Farmer's diagnosis until late on Thursday when a statement was released by the AFL.