Premiership defender Nick Vlastuin is pushing for a recall while Dustin Martin has returned from New Zealand but will need to pass concussion protocols before he is selected for Friday night’s grand final rematch against Geelong.

Martin was back at training on Monday completing running drills and also caught up with manager Ralph Carr, having visited his exiled father Shane over an extended weekend. 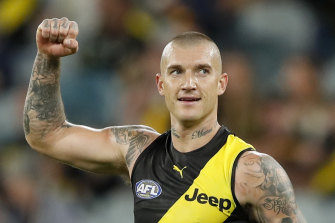 Dustin Martin is back training with Richmond.Credit:Getty Images

He was cleared to make the trip after he was concussed against Melbourne and was automatically ruled out of last Friday’s clash against the Western Bulldogs.

Martin, according to coach Damien Hardwick, had also been dealing with “foot issues” that while not significant, had impacted his explosiveness in a season when he is averaging 24 disposals per game. But the club hopes a week off will help refresh the Brownlow medallist.

His absence was set to test the Tigers but the defending champions produced their finest performance of the season after half-time to take down the Bulldogs, a fellow flag favourite.

The Tigers booted only two goals to half-time but in the third quarter had +11 contested possessions, 18-5 inside-50s and a pressure rating of 205 to the Dogs’ 168. Shai Bolton dominated that quarter and continues his rise as one of the league’s premier on-ball talents. Bolton’s contract status continues to be a talking point. 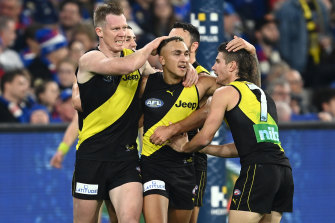 Tigers star: Shai Bolton is on the rise.Credit:Getty Images

Vlastuin had surgery on his cartilage on his right knee after he was subbed off against Carlton in round one. He has trained strongly in terms of running over the past week but kicking has been issue. He has complained of soreness when he kicks more than 30 metres. The Tigers said on Monday he still needed to “tick off a couple of boxes”.

The three-time premiership star is a key cog at half-back and will be particularly keen to play this week, for he was knocked out in a chaotic first quarter in the grand final by a Patrick Dangerfield spoil, prompting play to be stopped for nearly eight minutes.

Skipper Trent Cotchin has been ruled out, having strained a hamstring late in Friday night’s clash. Scans have shown the strain is a “medium-term” injury, backing coach Damien Hardwick’s initial assertion that Cotchin was set to miss “some weeks”. Considering his history of soft-tissue injuries, this could mean the Tigers take a particularly cautious attitude and have him sidelined for a month.

The hard-running Kane Lambert, nursing a calf strain, will also be a “medium-term” absence, according to the club.

Off contract at the end of the season and also managed by Carr, Bolton, playing a centre-bounce/forward role, finished the night with 22 disposals, including 10 inside-50s and three goals against the Bulldogs, in a performance that was Martin-esque.

Carr reiterated on Monday that he and Bolton, averaging almost 22 touches per game, would wait until the end of the season to weigh up Richmond’s offer and any that came from rival clubs.

“We made that decision earlier in the year, nothing has changed since then,” Carr said.

“Do we talk about it? No. We are just getting on with business … what I mean by business is the footy side.”

A three-year deal for Bolton would take him to free agency but he could expect a grander offer on the open market, particularly if, for instance, North Melbourne believe he could play a key role in their rebuild or the West Coast Eagles and Fremantle attempt to lure him home.

“I just stay out of it but Shai is an important player to us and he knows the fact that, and our players realise it, they can get paid more somewhere else, there is no doubt about that and they sacrifice to stay. But that’s what Richmond men do,” he said.

May 3, 2021 Rugby League Comments Off on ‘Business as usual’ for Bolton as Dusty returns to the Tiger fold
NFL News