Whoever takes "Charlie" home this year will do so remotely, with the AFL announcing that the Brownlow Medal will be held as a virtual event in 2020.

While there had been a push to hold the event as a smaller, socially distanced function at the Gold Coast Convention and Exhibition Centre, the league has decided that given the challenges of COVID-19 it is most appropriate to conduct the count as a pure television event. It will be held on the night of Sunday, October 18, six nights before the grand final. This is a change from the traditional Brownlow timeslot of the Monday night before the grand final. 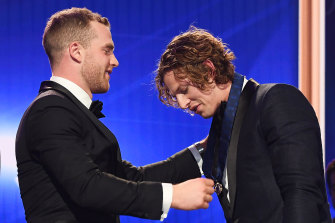 AFL commercial chief Kylie Rogers explained the decision as one that took into account the differences of life in 2020.

"The Charles Brownlow Medal is our game's highest individual honour and continues to be the most prestigious night of the AFL calendar," Rogers said.

"It's incredibly difficult to get people together in indoor event spaces in a responsible manner given the current environment, and the community's safety has been at the forefront of every decision we've made.

"While the glamour of the red carpet will be missed this year, we are looking forward to delivering a special format made specifically for the broadcast audience at home, so our fans can continue to celebrate their heroes and their achievements this year."

The count will again be broadcast by Channel Seven

"While this year's Brownlow Medal broadcast will be different, what won't change is the drama of the count and the prestige of the game's most coveted individual award. It truly is a magical night and we are down the track on plans to bring all the tension, drama and emotion to the fans at home as this year's fairest and best player is crowned," said Seven Melbourne managing director Lewis Martin.

First awarded in 1924, this year marks the 50th anniversary of the first televised Brownlow count, in which South Melbourne's Peter Bedford prevailed. Long dubbed "football's night of nights," the Brownlow has been held in Melbourne with the exception of 1999, a year in which it was held at Sydney's Hordern Pavilion.

For the best part of the last 25 years the Brownlow function has taken place at the Palladium Room at Crown Casino. While contingents of players from every club generally attend the grand final, players from non-Victorian teams playing in the grand final that week have tended to remain in their home states, meaning that a handful of winners – including Brisbane's Jason Akermanis in 2001 – have claimed Brownlows away from the main room, with spare medals on hand.

Brisbane Lions star Lachie Neale is the short-priced favourite to claim this year's award. Port Adelaide veteran Travis Boak is another of the hot tips.