Carlton will turn their attention to recruiting a ready-made midfielder after Sydney small forward Tom Papley decided to stay a Swan.

The Blues were one of several clubs in recent days that were informed by Papley's management that the Victorian would not be seeking a trade home. 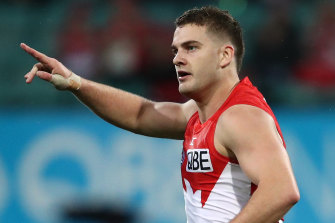 Papley requested a move to Carlton during last year's trade period but the move was blocked when Joe Daniher's trade from Essendon to Sydney fell apart at the eleventh hour.

It was presumed that Papley would once again seek a trade to the Blues 12 months later.

Carlton, who suffered a humiliating loss at the hands of bottom-placed Adelaide on Sunday, believe they are one star midfielder away from contending for a finals spot in 2021.

GWS free agent Zac Williams is at the top of the Blues' hit list, although that may change if his teammate Josh Kelly was to become available.

The Blues have significant room in their TPP after missing out on Giants captain Stephen Coniglio this time last year.