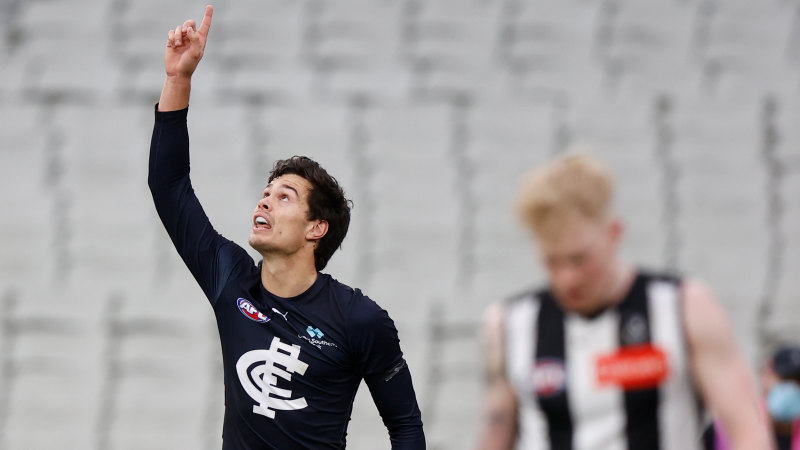 Carlton is set to begin contract negotiations with Jack Silvagni, who is set to be rewarded for his performances with the offer of a new deal.

Club sources confirmed that the Blues planned to sit down with Silvagni’s manager, Tom Petroro of TLA, and discuss another contract for Silvagni, who had an excellent game against Collingwood after an emotional week in which his legendary grandfather, and Carlton great, Sergio Silvagni passed away. 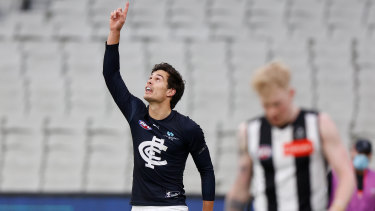 Silvagni, 23, has stood up well for the Blues in recent weeks when they have had limited stocks of talls due to injury and played a pivotal role in their comeback victory over the Magpies, grabbing seven marks – including a screamer – and acting as the back-up ruck in supporting Tom de Koning against Brodie Grundy.

Contract discussions were set to begin as soon as possible, bearing in mind the restrictions of the lockdown in Melbourne.

Silvagni openly displayed his emotions during and after the match, in what was a difficult week for him and his famed football family.

He is the third generation of his family to have worn the no.1 guernsey at Carlton following his distinguished father Stephen and grandfather Serge, who are among the most decorated players to have played for the Blues.

Silvagni has so far played 75 games and booted 54 goals since he was drafted to the club under the father-son rule and has enjoyed a better year than in 2020 when he was injured for much of the shortened season.

The Blues had been forced to use him as a back-up ruck due to the unavailability of talls such as Levi Casboult and Mitch McGovern, and he also played as the secondary target behind Harry McKay.