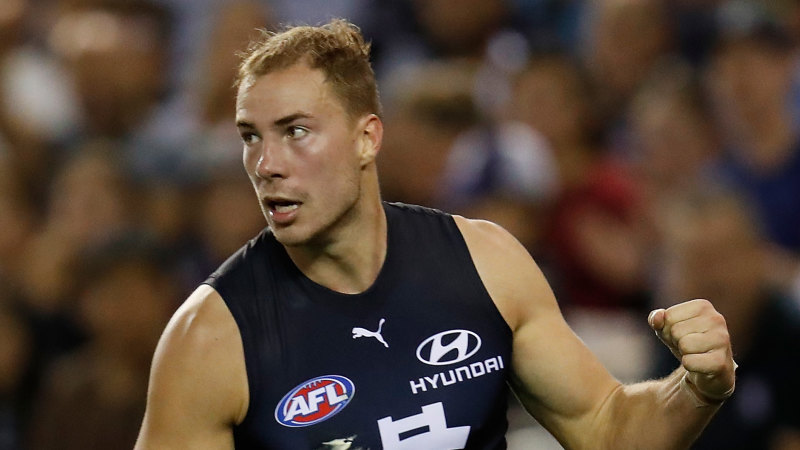 Harry McKay is fast emerging as one of the AFL’s most coveted out-of-contract players but the Blues are moving to lock away the key forward, with the club to meet with his management in the bye round for talks about a new deal.

Sources said McKay and Carlton have been in regular, amicable discussions about a new contract and he is highly likely to remain at the Blues, with the player and his management not in discussions with another club. 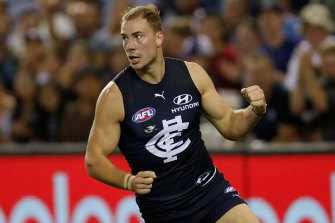 Harry McKay will be out of contract at the end of this season.Credit:Getty Images

McKay’s manager Dave Trotter of Hemisphere and Carlton’s list manager Nick Austin agreed that with a season-shaping block of games ahead against the Bulldogs, Melbourne, Hawthorn, Sydney and West Coast they would wait to sit down during the Blues’ bye in round 13 for serious discussions.

The forward is a laid-back figure who has not turned his mind significantly to dollar terms or length of contract, but has expressed his strong preference to remain with the Blues.

McKay was the subject of a significant approach by Essendon in last year’s trade period when Adam Saad wanted to move to the Blues and McKay was one of the first players Essendon asked for in exchange.

His brother Ben plays at North Melbourne and the Roos, who have salary cap space, would logically have interest in the Carlton key forward should he be inclined to move.

The key forward could command about $800,000 a year to move elsewhere. How much he is worth to Carlton is a more vexing proposition for a club that already has Charlie Curnow dealing with a long-term injury and the underperforming Mitch McGovern on significant contracts.

Carlton also have captain Patrick Cripps out of contract at the end of the year and are in discussions with him about a new deal.

In terms of priority and wage structure, the captain would be an important signature to secure on a new contract but in terms of structural significance, young key forwards are hard to find.

Carlton are likely to favour a slightly longer-term deal to keep McKay beyond the free agency trigger period, while it is uncertain what the player would favour.

McKay was drafted at pick 10 in 2015 and so is in his sixth season. Players achieve free agency status after eight years.

McKay’s stocks have continued to rise this year after commencing the season as a player of significant potential who had yet to consistently perform to his best.

He has now booted 26 goals in seven games with 10 coming in the last two matches. He kicked a match-winning four goals against Essendon on Sunday coming off the back of a six goal bag against the Brisbane Lions the week before.

May 4, 2021 Rugby League Comments Off on Blues, McKay to talk contract during bye round
NFL News