Chris Judd had been the hardest trainer legendary Carlton recruiter and football department boss Shane O’Sullivan had seen in more than four decades of involvement in the VFL-AFL.

That was until Sam Walsh, a young lad from the Victorian south-western town of Camperdown, joined the club. 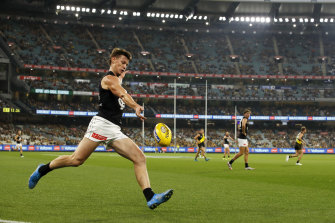 ‘Just amazing’: Sam Walsh is receiving high praise from many in the football industry.Credit:Getty Images

“The great thing about him, I don’t think I have ever seen anyone train like him. I thought ‘Juddy’ was unbelievable but in this modern era that is professional, if you watch him train, it is exactly how he plays,” O’Sullivan said.

“As he gets stronger in that, I can only see him get better. He is just amazing how he gets from one contest to another. He doesn’t just think it’s going to happen. If you watch him train, the intensity of the way he trains is unbelievable. In a game, there are so many efforts, whether it’s the ball being thrown in or bounced, he is back in it [the contest] straight away.

“When I think about it, it’s a bit Robert Harvey-ish. He goes hard, sucks the air in, then is ready to go again.”

It’s this work ethic that Judd, now Carlton’s director of football, said the Blues needed more of when he retired in 2014 and allowed Walsh, the 2019 Rising Star winner, to shift into the centre square late last season and become the complete midfielder.

Having been eased through for almost two seasons as a hard-running wingman, the “training wheels” are off, and he again will be a major threat at centre bounces in Thursday night’s crunch clash against Collingwood at the MCG.

Walsh was used in the centre square only 17 times in the opening 15 rounds last season but, with the Blues needing more drive and help, he was at the centre bounce 37 times in the final two matches. That influence continued against Richmond in round one, when he was at the centre bounce 21 times, finishing with 31 disposals, including 13 contested – the latter a figure he had only beaten three times through his 40 matches.

For the Blues to vault into the top eight, they know they need more help for Patrick Cripps in the stoppage furnace, and Walsh – having gained muscle over summer – is the man who can win the hard ball but also provide run and carry. Already tipped by club insiders as a future captain, the on-field smarts of the former Geelong Falcon are also a highlight, with Tigers coach Damien Hardwick noting “the game comes to him”.

“He is the sort of young fella that wants to challenge himself anyway. The great thing is he is prepared to play where the coach thinks they need him at the time,” O’Sullivan, now running the Blues’ past players association, said.

Sam Walsh gets a centre bounce clearance in round one.Credit:Channel Seven

Asked if Walsh could ultimately be remembered as a great alongside the likes of Greg Williams, Craig Bradley and Judd, O’Sullivan was unequivocal.

“In his first two years, fourth in the best and fairest and second, particularly last year, it’s not as if we are a bottom of the ladder team anymore, we are an emerging team, for someone so young to be in that bracket, he could be anything,” he said.

Blues great Williams spent time with Walsh through the 2020 pre-season when working as a part-time skills coach and marvelled at his youthful zest.

“He is amazing, that kid … it’s really funny, he plays a game, then comes out on the Sunday and Monday and it’s like he hasn’t played a game,” he said on SEN radio.

“He has got that motor, that energy, it’s just amazing.”

During last week’s clash, St Kilda Nick Riewoldt declared on Fox Footy that Walsh “looked absolutely complete as a midfielder” while Garry Lyon praised his toughness and class and noted he was “clean below his knees” in terms of how he did not fumble when taking possession.

O’Sullivan will on Thursday run the premiership reunion of the Blues’ famous 1970 flag against the Magpies, delayed since last year because of the coronavirus outbreak. The manner in which Walsh plays has buoyed spirits among those greats that a 17th cup – and the end of the biggest premiership drought in club history – can be delivered by 2023 under the club’s The Carlton Way blueprint.

March 23, 2021 Rugby League Comments Off on ‘Better than Judd’: Training wheels are off as Walsh stars in new role
NFL News