Essendon's review – which took place from shortly after the season ended – also found that the club had gone too far in empowering the players under previous coach John Worsfold.

The candid and searching Essendon review – conducted by new president Paul Brasher with assistance of board members and club greats Sean Wellman, Kevin Sheedy and Simon Madden – also found the need for a more consistent and identifiable game style, a finding that came partly from feedback from interviews with players. 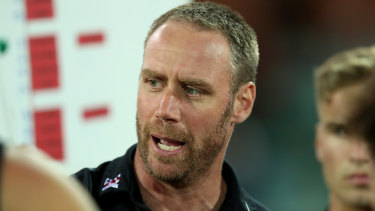 The review – a summary of which was released to members on Tuesday – found that the players did not think the club was "in chaos'' although there were a number of issues that needed redress. The Bombers removed football boss Dan Richardson after the review and hope to have his replacement by Christmas.

"I think the most important finding was that the players don't think the club is in absolute chaos, that they actually thought it's exaggerated but there are a lot of issues to deal with,'' Brasher told The Age.

"They love Ben as a person and a coach. They think he's going to be a good coach when he's given his own free hand with the team and they're looking forward to next year.''

Brasher said there were four areas of concern that the review had addressed: defining what the club stood for, a recommendation to reduce player empowerment and demand minimum standards instead; a need to improve feedback and leadership in the playing group, providing support for skipper Dyson Heppell.

"Just understanding exactly what it is – you know, we're not Richmond, we're not some other team. We need to understand the game style that's going to work for us and be able to communicate that to our players, but also to our members and our fans.

"They (players) want more probably consistency in game style and, you know, better able to recognise it rather than having it just play out on the field, you're not quite sure how to define it.''

The review said Rutten would be suited to a system that demanded standards and accountability from players and that he needed to avoid mixed messages. 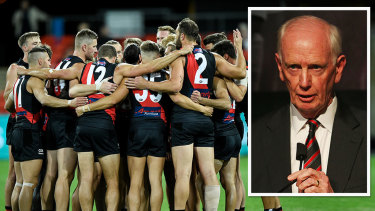 "The four big areas we would worry about are identifying what we stand for as a club, as a footy team. We need to get better at that,'' said Brasher, who sat in on all the interviews with staff and players, in a review sparked partly by Adam Saad’s exit (to Carlton), which the club saw as more consequential than the expected departures of Joe Daniher, Orazio Fantasia and Conor McKenna.

"Getting the balance right between empowerment – we've probably gone too far in the direction of empowerment – bringing that balance back more to minimum standards and accountability and that's going to play more to Ben's natural style of coaching.

"Tough feedback – being able to give and receive constructive feedback, we haven't been very good at it, and we need to get better and it's got to be consistent, that all the coaches are the same, players can give and receive it.

"And the leadership thing, that we need to be better at bringing in leaders, identifying them, developing them and selecting them into the group.

"More support for Dyson, who's, you know, he's a clear stand out leader at the moment.''

Brasher said there were "fantastic'' potential leaders in the 20-23-year old group at the club. "We need to help them to develop it.''

In the summary to members, Brasher said: "We must be clear on how we play and what we stand for'' and restated that the club's "overriding objective'' was winning.

Brasher told The Age the review found Rutten had to be clear in his messaging.

"The finding on Ben was that he needs to be clear that he's responsible for the team and be very clear in his feedback, make sure there were no mixed messages from other coaches, people in the club, he's going to control the whole narrative for the players.

"The one concern is that he doesn't take on too much and, you know, run himself ragged trying to do everything, because his natural inclination will be to say 'I'm in control of this club now and I'm going to take it forward.' So we need to make sure we give him the right support.''

In the summary for members, Brasher said the players "wanted to be pushed hard in training'', adding feedback would be improved by prioritising "relationships and connectedness'' amongst coaches and players, which was "an important criteria in the appointment of (ex-Bulldogs assistant) Daniel Giansiracusa.''