South Sydney officials watched Latrell Mitchell complete his first full field session of the year on Tuesday then backed him to be more than ready for the Indigenous All Stars game in Rotorua next month.

And his older brother, Shaquai, revealed he would head into the February 11 fixture the lightest he has ever played at. 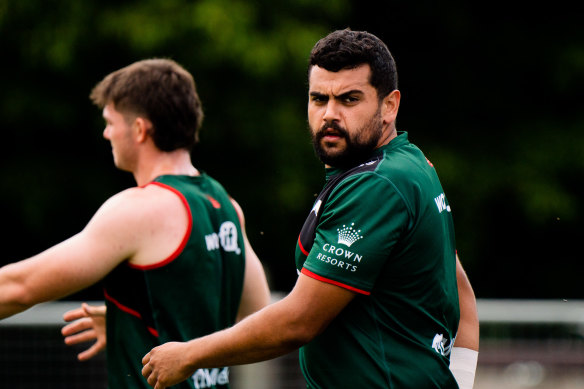 Shaquai Mitchell will return for the Indigenous All Stars the lightest he has been.Credit:Shannon Aldwell/South Sydney Rabbitohs

The NRL are expected to name the Indigenous and Maori All Stars squads on Wednesday, with the Indigenous team to feature the Mitchell brothers, Cody Walker – who will double as an assistant coach – Dally M winner Nicho Hynes, Penrith recruit Tyrone Peachey, Canterbury flyer Josh Addo-Carr and Brisbane’s Selwyn Cobbo.

Latrell Mitchell only returned to training at the start of the month following the end-of-season World Cup in England, but was already showing glimpses of his damaging best in the blistering heat at Redfern Oval.

“Latrell’s maturity over the last 12 months has been there to see, and it’s been evident with how he’s returned – he’s come back in the best shape he’s been in,” Souths coach Jason Demetriou said. 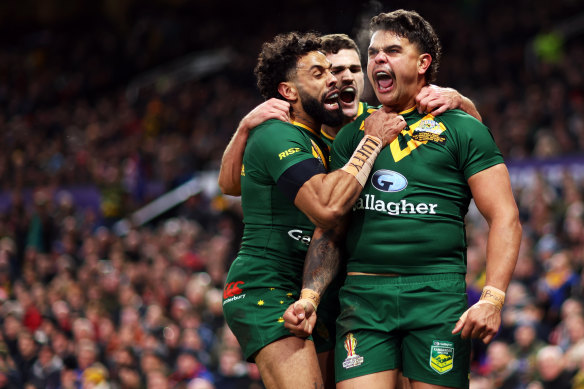 Latrell Mitchell has returned to training in top condition following the World Cup.Credit:Getty

“He’ll be close to match fitness by the time they go away [for the All Stars]. It’s an important week, he’s a leader in the Indigenous community, he’s very well respected and looked up to, and it will be great to see him running around.

“Like all teams at this time of year, we have work to do with our execution and connection, but Latrell’s energy has been outstanding.”

One of the highlights of last year’s game was the arrival of Shaquai Mitchell, who was almost lost to the game when he ballooned to 179kg. He was reduced to tears when Latrell phoned him to break the news of his selection in the All Stars side.

Shaquai has not looked back since that night, played three NRL games, and continued to drop the weight in the hope of building to his first-grade appearances, especially with a front-row vacancy created by Mark Nicholls.

“I arrived here for pre-season training at the start of last season about 125kg, dropped to 118kg, then added some muscle and played just over 120kg,” Shaq said. “Now I’m down to about 116kg, which is the lightest I’ve been in a long time.

“The goal is to play more [NRL]. I don’t like taking free hands out, I work hard for my [success], and that’s how I want to keep it. There’s so much talent in this squad, we’re all competing for spots, that’s the name of the game, and all I can do is keep pushing.”

“What Shaq achieved last year is just the start, and he’s backed it up again this pre-season by coming back in the better shape again – he goes into this All Stars game in a better headspace and a lot more confidence than he did last year,” Demetriou said.

January 24, 2023 Rugby League Comments Off on ‘Best shape he’s been in’: No World Cup hangover for Latrell
NFL News