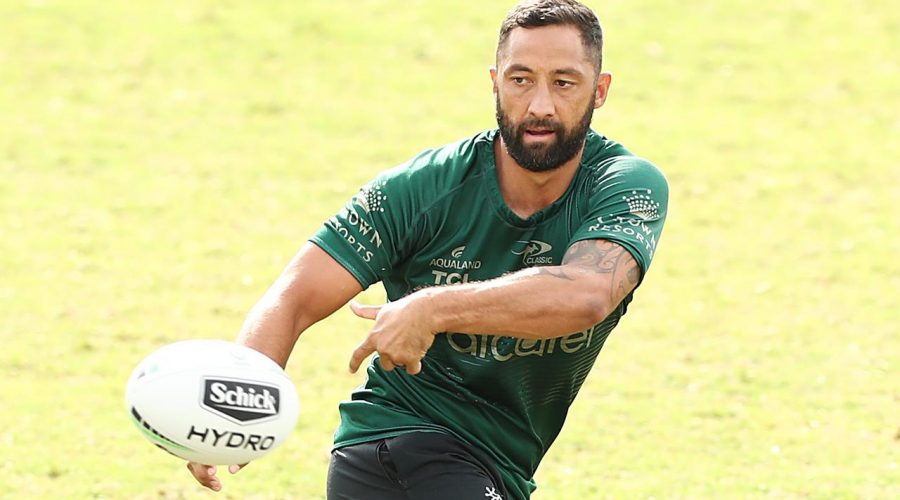 Benji Marshall reckons it only took a handful of sessions to see why South Sydney are primed to win the premiership under supercoach Wayne Bennett.

Marshall has been around the NRL block a few times, but even he is blown away by the slickness and sheer focus of the Rabbitohs in drills and during team talks.

It’s why he wasn’t stunned when the red and greens blew St George Illawarra off the park in the annual Charity Shield with some of the prettiest backline plays ever seen in February.

“It isn’t surprising because the training standards at Souths are phenomenal,” Marshall said ahead of Thursday’s season opener against the Storm in Melbourne.

“To be honest, those things that happened in the Charity Shield were the same things that I’ve been seeing in the last four weeks since being at the club.

“They work on those combinations; they talk through them and everyone knows their roles.

“Since I’ve been at Souths, Wayne is really pushing a train-to-win attitude, and I’ve just noticed that the boys really want to win.”

Marshall says there is also a determination in the Souths players’ eyes after failing to capitalise in the finals for the past few seasons.

He believes the Rabbitohs’ deep desire to become the NRL’s best has filtered through in everything the team does.

“Losing three preliminary finals in a row has really felt like a let-down for a lot of them,” he said.

“So, taking that next step, I think they really want to step up in everything.

“At training, I’ve noticed a massive step up from a lot of the boys.

“That is what it is about – you have to train how you play.”

Benji Marshall is ready to make the most of what is looming as his final NRL season with South Sydney in 2021. Picture: Adam YipSource:News Corp Australia

Marshall knows he won’t play a major starting role with Souths this season, and he’ll come off the bench as the Bunnies’ super sub, but he isn’t worried.

In what will most likely be his final NRL season after making his debut with the Wests Tigers back in 2003, he is happy to add another year to his illustrious resume.

“I’m playing because I want to play and because I feel like my body can play,” the 36-year-old said.

“You have to be mentally ready to play, and upstairs your mind has to want to play.

“So, when you go to training you have to be ready to go for the grind. Be ready for it to hurt.

“You can’t turn up and try and shortcut your way through, so I’m sweet. This is the best I’ve felt in ages.

“The role that I’m going to be playing at Souths is something that I’m really looking forward to.

“I think it is a great challenge and I’m really excited.

“I’m treating it like my last (season) for sure, but it is weird, man.

“Everyone seems to have an opinion about how old you are, and if you don’t stop playing, they ask why are you playing?

“But everyone worries about it more than I do, you know.”

Benji Marshall says there is a reason Wayne Bennett should be hailed as the game’s greatest coach. Picture: Adam YipSource:News Corp Australia

SENDING WAYNE OUT A WINNER

Marshall knows his career wouldn’t be where it is today without Wayne Bennett.

He has worked under the seven-time premiership winning coach at Brisbane, while the pair joined forces to help New Zealand win the 2008 World Cup.

Now he is back with Bennett at the Bunnies in what is shaping as the master mentor’s final season at Redfern.

“As my missus likes to say, he has saved my career twice now.

“People have a perception of what Wayne is like – this preconceived idea that is he just a grumpy old man that doesn’t laugh.

“But he has got the biggest sense of humour out of any of the coaches that I’ve had.

“He is funny, and he genuinely cares about his players. I just think there is a reason he is the greatest of all time, and that is why I’m playing at Souths this year for that opportunity to be alongside him again.”