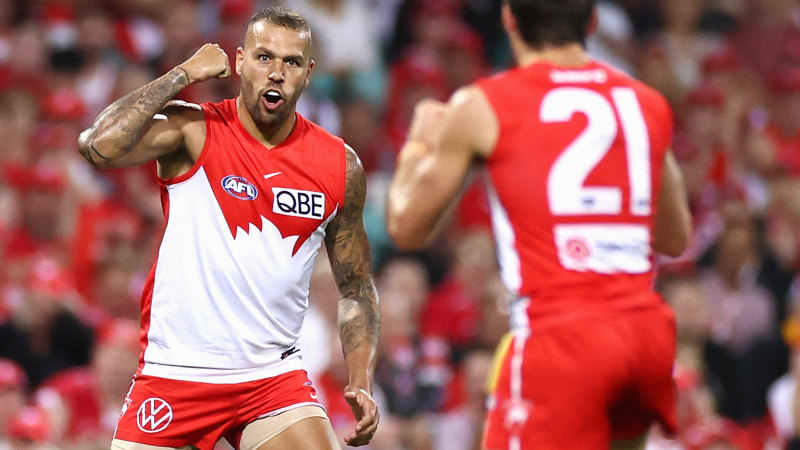 Lance Franklin is planning for an extended run of matches for the Sydney Swans after his match-winning turn at the death against Essendon vindicated the club’s conservative management of his return.

Franklin was quiet on Thursday night but came up with a big play at the end when the match was on the line, with a huge contested mark and goal to seal a three-point win over the Bombers. 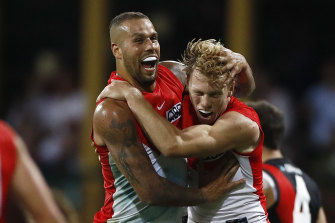 Callum Mills of the Swans celebrates a goal with Lance Franklin.Credit:Getty Images

It was his third of the night and more proof, if it was needed, that the 34-year-old is still a force to be reckoned with despite fears over his longevity after two injury-wrecked years, and an irresistible add-on to the new-look team that has taken the AFL by storm.

The crowd of nearly 30,000 – substantially bigger than the one that turned out at Moore Park for Franklin’s comeback game against Adelaide in round two – also shows that the city is starting to rally behind the resurgent, reinvigorated Swans, who are now 4-0 for the first time since their 2012 premiership season.

Franklin and Sydney now have nine days to rest up until next Saturday’s derby against Greater Western Sydney, and then have consecutive seven-day breaks as they face Gold Coast (away) and Geelong (home) in the following rounds.

“Away I go now,” Franklin told Seven. “That was always the plan – play one and miss one and away we go from now, which will be good.”

Coach John Longmire put on record early in the season that Franklin would not play every match this season, even if he felt fit and ready to go, because the veteran needs to focus on a specific strengthening program of his core, adductors and hamstrings designed to prevent further soft-tissue injuries.

However, the way the AFL fixture has broken for the Swans gives Franklin the opportunity for his first spell of regular football since the first half of 2019, barring any mishaps along the way.

“It’s not an exact science, this stuff,” Longmire said.

“You go with a lot of science behind it and what you need to do and then there’s a bit of gut feel at the end you need to get right.

“Our medical condition guys have been very good with that, Lance has been good, he’s done a lot of work. It’s ongoing now. We’ve got a few days before next week’s game which is a good thing for him.

“We’ll take it as we see it. There’s no rollout plan other than we’ll just see how he goes.”

After just four rounds, the Swans have now kicked 446 points – more than half the 890 they scored throughout the entirety of last season.

While that is partly attributable to the shorter quarters played in 2020 and the new rule changes which have unlocked scoring this year, it further illustrates how the Swans have blossomed with a more aggressive, expansive game style than has been seen under Longmire or his predecessor Paul Roos.

They will go into next week’s clash with the Giants, who face Collingwood on Saturday, as red-hot favourites, having last year embarrassed their crosstown rivals with a 41-point ambush at Perth’s Optus Stadium.